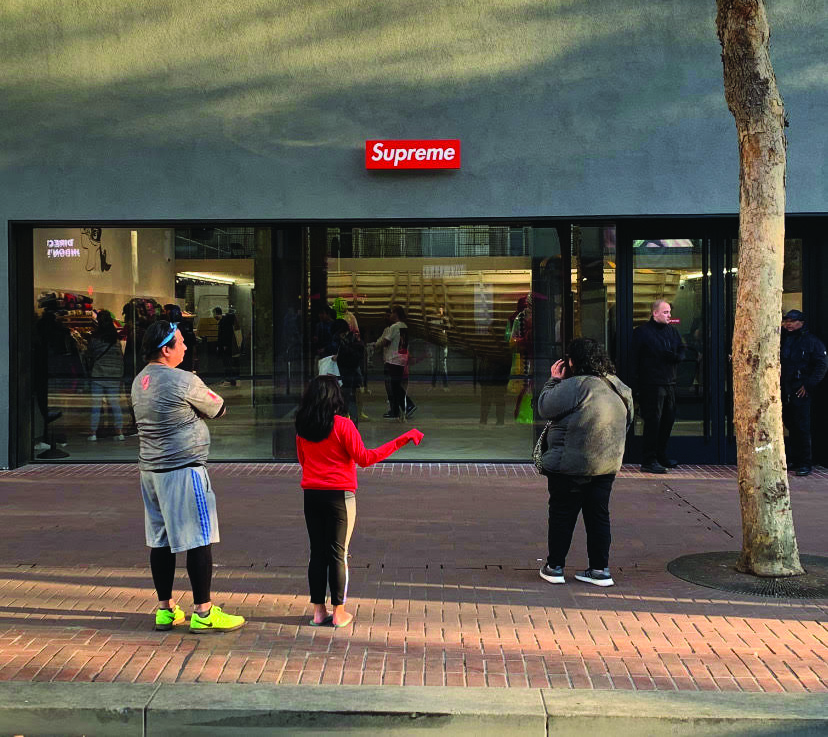 The new Supreme store on Market Street is already a hit, attracting crowds of shoppers every day.

After many months of rumors, the extremely popular skating brand, Supreme New York, has finally opened its highly anticipated store in Downtown San Francisco at 1015 Market Street in the Financial District.

“It’s really cool and exciting to see a Supreme store in San Francisco, which is a benefit for everyone,” said student Gian Ramirez ’22.

Supreme New York had been open on Lafayette Street in SoHo, New York City since 1994, but just recently closed its 25-year old store to relocate to Bowery Street in The Bowery. Supreme has stores around the globe as well, in places such as London, Paris, and even Osaka, Japan. The rumor of the store opening has been going around since late 2018, but was confirmed in July of 2019.

The store opened its doors on Oct. 24, 2019, and the streets were packed with people. People were lining up the night before, even though customers were required to sign up online to even enter the store. Supreme releases new clothing every Thursday on their website and in stores, but in order to enter the store, customers must sign up prior to Tuesday to get a designated time slot for Thursday.

After that, they can enter the store at any time any other day from 11-7 or 12-6 on Sundays. Yet, it can still take up to two hours to enter with lines stretching down Market.

Besides the hype, Supreme released an exclusive “San Francisco Box Logo” t-shirt to go with the grand opening, which attracted even more people to the store. The retail price of the shirt was set at $54. After it sold out, resellers started selling them at $500. A reseller is someone who resells clothing or shoes to consumers that didn’t get the item of desire to make a profit.

Students have also been going to the store. But why do students like this brand so much?

“I like the hype around it and I connect with the people,” said James Sanchez ’22.

“To be honest, the drive or demand of it makes me like Supreme,” said Justin Samaniego ’22.

Is waiting in a long line even worth it for a T-shirt or a hoodie? “Depends. If you know what you’re buying already, then yes. If not, then it’s not because you may not find something of your liking because Supreme’s type of fashion is more a street look or skater look. If that’s not your type of fashion, I wouldn’t even be looking at Supreme in the first place,” Samaniego said.

For now, students will definitely be returning to see what’s new at Supreme.

Ramirez said, “I think I will go pretty often to get bags and clothes for my collection.”