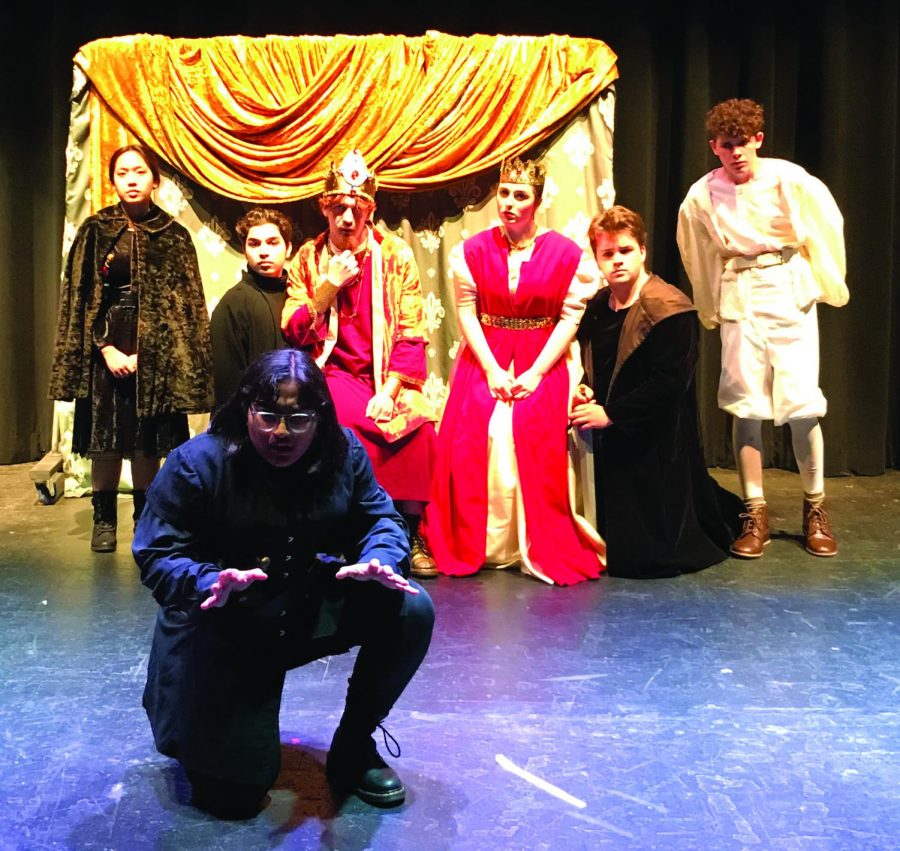 The fall play, “Perfect Storm,” was directed by students.

In Black Box seating on the stage of the Lindland Theater, 90 audience members watched Riordan’s fall play, “Perfect Storm,” a crowd pleaser, as all six performances were sold out.

“Sure Thing” featured characterswere Betty and Bill, whose conversation is reset by a ringing bell, which means they have to say a different line. The actors, Jeremy Sherron and Lissete Trindid ’20, reset every time Bell Ringer Karenina Garlitos ’22 gave the signal. I surely enjoyed “Sure Thing” because it was extremely funny and the actors seemed to enjoy the company of each other.

JT said, “I have never hadany sort of directing experiencebefore and it sometimes gotoverwhelming, but I was lucky that I had Ms. O’Riordan and the other directors to rely on when I needed guiding.”

“Line,” directed by Moody, is about five people, which includes Fleming played by Alec Douglas ’21, Stephen by Isaiah Clark ’21, Molly by Annika Ponciano ‘21, Arnall by Henry Bensurto ’20, Donna by Bella Mason ’21, all waiting in line for an event that is never made clear. Each character finds a way to be first in line. “Line” hit all the right notes.

Moody said of directing, “Itwas challenging, exciting, nerve-racking and worth every second.’’

Next, “15 Minute Hamlet,” was short because it condensed “Hamlet” into 15 minutes, 10 minutes, 5 minutes, 1 minute, and nally 5 seconds long. All the actors in this Shakespearian play were amazing, no matter how condensed it was and the audience enjoyed it immensely as evidenced by the laughter. “Fifteen Minute Hamlet” made a tragedy into a hilarious comedy. Yiakis said of directing, it was “both challenging and fun.”

The nal performance, “Perfect Storm,” included every memberof the cast in a series of shortimprovised scenes that include the use of props and audience participation in choosing the scene. In a scene that required choice, an assortment of interesting props included a toy rifle, a camera, a toy sword, and other interesting items.

“Perfect Storm Improv” was outstanding and interesting towatch how the actors worked with the audience’s suggestions. It certainly lived up to its claim, as it was described as, “No one knows what is going to happen, not even me.”

No production would be complete without the stage crew, under the leadership of Amanda Neubarth. The props, which included the wall in “Line”and the rails that were on the risers that made it so audience members didn’t fall off them.

Drama Producer Valerie O’Riordan and her talented actors and stage crew will be back in the spring for the production of The 25th Annual Putnam County Spelling Bee.