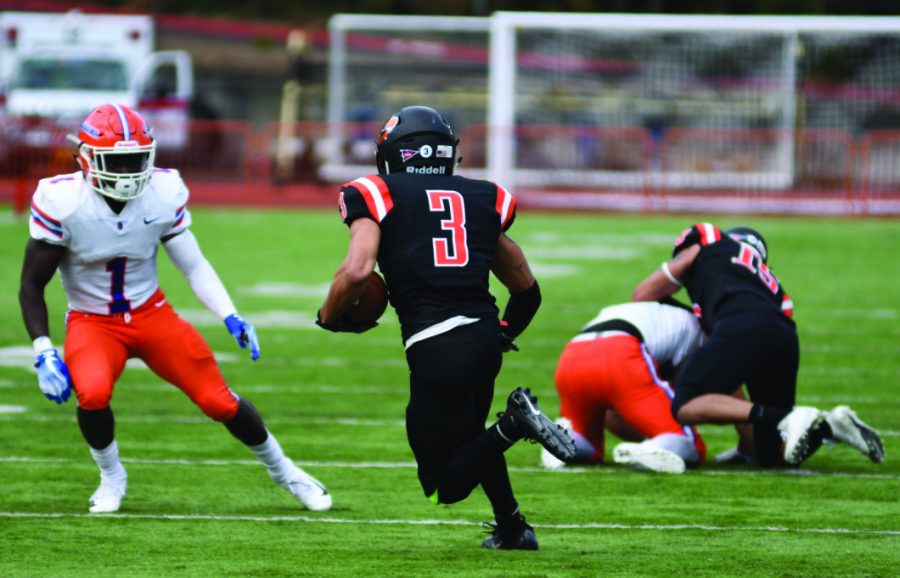 Aidan-Verba Hamilton (3) is a rising star at Lewis & Clark College.

Aidan Verba-Hamilton graduated from Archbishop Riordan High School in 2016. In his senior year, he amounted 1,634 all purpose yards, carrying the Crusaders all the way to the 2015 CIF Central Coast Section Championship.

His human-highlight-reel play led him to score 8 of his 15 total touchdowns on kick returns and punt returns and averaged 47.8 yards per kick return.

“He’s the greatest return man that I have ever seen in person and that’s not just at Riordan, that’s everywhere…he was simply the best there was nobody better in terms of kick return/punt return ever,” Athletic Director Bob Greene said. “I could do this for 50 years and not find another return guy as good as him in highschool.”

“I could tell early on that Aidan was a very explosive player, he had a good knowledge of the game and was blessed with amazing speed. He also had excellent vision in the return game. He was able to use his gifts to be an all-league specialist,” Riordan Varsity Football Coach 2015-2016 Kevin Fordon said.

All throughout his career, he stepped up in the most crucial games and moments.

In his sophomore year, he was clearly too good to be on the Junior Varsity team and he finally got his first start in the Varsity season finale against Bellarmine when he totaled 123 receiving yards.

In his junior year, his stats did not jump off the page immediately, but still amounted to 38 percent of the team’s receiving yards.

His senior season was completely different and was when he started catching everyone’s attention. On Oct. 10, 2015, Riordan beat Serra for the first time in eight years thanks to Aidan’s 8 catches for 205 yards and 4 touchdowns. Two weeks later, Aidan Verba- Hamilton had 4 catches for 129 yards and a TD along with a 76 yard kickoff return TD in a route against Saint Ignatius.

“He had a knack for it…he just had this ability to be patient and find a crease and once he reached top speed, you couldn’t catch him…it got to a point where teams would stop kicking it to him,” Athletic Director and former Varsity football coach Jay’Sen Morris ’07 said.

Verba-Hamilton is currently a senior at Lewis & Clark College, and is trying to help rebuild a struggling football program. Unsurprisingly, he is playing exceptionally well in the Northwest Conference in Division III. He ranks best in yards per catch and is top 10 in the conference in yards and touchdowns.

On Oct. 12, Aidan caught 9 passes for 331 yards and 2 touchdowns in a losing effort against a 5 win Whitworth squad.

“He was always a good athlete and a good receiver, great route- runner, really good feet, super fast, he was always a special player and we knew he could make it to the next level…I’m not surprised at all,” said Morris.

Lewis & Clark finished the season with 3 conference wins, the most since 2011.

Fordon said, “I had no doubt Aidan would be successful. Too much talent and drive to not make an impact no matter where he was.”