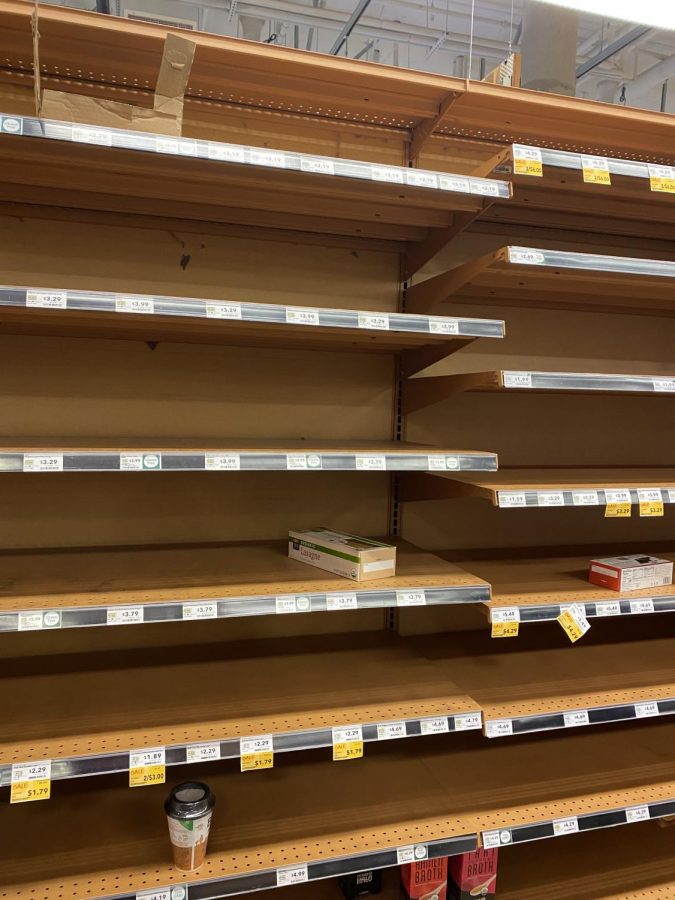 The effects of hoarding are showcased at Whole Foods on Ocean Ave. near Archbishop Riordan.

This year saw the rise of a new coronavirus that swept around the world, reaching pandemic levels. Today, grocery stores are fraught with long lines and empty shelves as customers have an unusually high demand for toilet paper.

Panic set in as coronavirus caused quarantines and cancellations nearly everywhere, and many businesses found their supply of toilet paper mysteriously depleted. I experienced this first hand when my family’s supplier of toilet paper, the local Costco Business Center in South San Francisco, was feeling the pinch. That Costco store put a two pack per person limit on toilet paper purchases.

Denise Thomas, Front End Manager of the Safeway on Seventh Avenue and Cabrillo Street and my aunt-in-law spoke about the pandemonium that set in because of the crisis. “The average wait time to get to the check out was an hour and a half.” The store placed even stricter restrictions on packs of toilet paper. She said, “The limit now is one, one per household per day.”

However, this phenomenon affects much more than toilet paper, as resources such as food and sanitizer are being bought in bulk and hoarded by shoppers nationwide. “After the toilet paper, they started buying up the cleaning products, the hand sanitizer…” The increase of hoarding changed the hours of the store, making it close early. “We’re closing earlier, at 10, so we can restock the shelves,” Thomas said.

Levis Rodriguez, ’20 reported similar incidents happening at Trader Joe’s where he works, saying, “We’ve had to restrict entrance to only 50 customers in the store at a time because the CDC advised us to. That then caused extremely long lines to form.”

Along with the restrictions on people allowed in and long lines, there are also empty shelves and earlier closing times. “We also changed our hours from 8am-9pm to 9am-7pm to give us more time to stock back up on inventory. After every shift or throughout the day, we do a deep cleaning to disinfect the store.”

One particular incident happened in Tennessee when Matt Colvin and his brother bought 17,700 bottles of hand sanitizer at the beginning of the outbreak, allegedly in an attempt to sell it and make a profit. Upon being investigated for price gouging, an offense punishable in Tennessee by a fine of between $1 to 3 thousand according to Findlaw.com, Colvin decided to donate his hand sanitizer, telling news outlets that he had no malicious intent.

To assist in the crisis, many stores have decided to set aside “senior hours” where only senior citizens are allowed to shop in the store. Zanotto’s Market, a local chain of grocery stores in the Bay Area, was among the first to implement this policy in its stores.

According to ABC7, Fred Zanotto, the Vice President of Operations, was inspired to do something after seeing the long lines at other stores. On the grocery chain’s official website, it states, “For Willow Glen, Sunnyvale and Rose Garden, seniors will be allowed to shop 1 hour before opening to the general public from 8am-9am.”

Safeway on Seventh Avenue has implemented a similar policy. According to Thomas, “From 6am to 9am, we’re allowing only senior citizens to shop.”

According to KRON4, other stores followed suit. Following the footsteps of other chains such as Target or Walmart, Costco set these hours for seniors 60 or older on Tuesdays and Thursdays from 8am to 9am.

On March 23, President Trump issued an executive order to combat hoarding, making those guilty of hoarding and price gouging of certain necessary health supplies subject to criminal action on a national scale.

Local leaders also emphasize the importance of not going overboard with hoarding materials, as this affects everyone’s access to these commonalities. Even Gov. Gavin Newsom’s home ran short toilet paper: his wife Jennifer Newsom on March 18 tweeted, “We run out of toilet paper, paper towels, and Kleenex tomorrow. I wish people had not hoarded.”

Medical and health professionals have been reminding people that a superlative supply of toilet paper is not directly related to any symptoms consistent with the coronavirus.