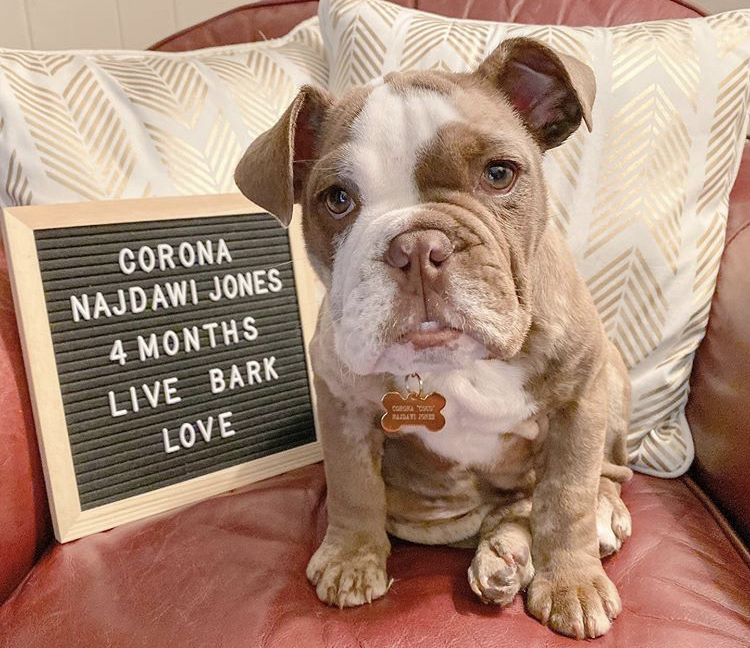 Corona, or “Coco," has been a source of entertainment for Jones during the pandemic.

Finding any type of silver lining when it comes to the coronavirus pandemic is rare, even more so when staying home all day becomes a repetitive mental grind. The shelter-in-place order has people all across the country struggling to discover hobbies, work from home, cope with distance learning, and find creative ways to entertain themselves.

Some people who live by themselves have found the quarantine hard to cope with, dealing with loneliness and an isolated feeling that can’t match the energy that is brought to the table by a family of four.

A solution during this spring’s health crisis has been for people to bring pets into their household. Since the shelter-in-place order has been installed, more and more people have been adopting pets or purchasing from breeders. Some think it’s just a coincidence, but researchers believe the pandemic is leaving many people in search to fill a void.

According to the Insurance Information Institute, 63.4 percent of people that own pets are owners of dogs. Veterinarians have seen that number rise recently as most of their business has come via new adoptions.

The American Society for the Prevention of Cruelty to Animals saw more than 600 applications roll through their Los Angeles and New York City programs, nearly a 200 percent increase from normal business.

At first, many prospective pet owners were hesitant to invest in pets with the fear that COVID-19 could be transmitted to humans. According to the CDC, this is a rare occurrence and shouldn’t prevent any adoption.

In a lot of areas during the shelter-in-place, people could be often spotted walking dogs through the neighborhood. The addition of pets opens up the possibility of numerous other activities to spend with them, whether it be creating a maze for a cat or playing fetch with the dog.

Even though this is a positive development, there’s a downside to the current sensation. Nonessential workers will have to put together a game plan for when they return to work, or when the children go back to school in the fall. These situations will change the pets’ mindset and routine as well, as learning life without the owner could take an emotional toll on them in the beginning stages.

Strength and Conditioning Coach Ryan Jones ‘09 and his wife brought home a four-month-old English bulldog on March 18, whom they dubbed “Coco.” According to Jones, the puppy’s actual name is Corona, which was chosen to shed a breathing light and memory to remember the current pandemic.

Michael Douglas ‘21 has followed this trend as he and his family recently brought home a new furry friend, a female Rottweiler named Sadie.

“She is an amazing and loving dog who loves to snuggle with everyone,” Douglas said of his new prize possession. “She definitely made our quarantine way better.”

Director of Special Events and Planned Giving Karin Haskell purchased a Mini Australian Shepherd Heeler Mix, which she and her family named Ollie.

Haskell said, “My children had been asking for a dog for several years and we felt that now, with all of us at home, we had the time to spend caring and training a puppy.”

Ollie, who was brought into the family at 8-weeks-old in February, is still in the early puppy stages where sleeping is a regular occurrence. In just a few weeks, he’ll be able to join them for walks. Due to the unavailability of a traditional training school, the Haskell family has turned to YouTube for help.

“As a herding dog, he likes to nip at our ankles,” Haskell mentioned. “So we are currently working on training.”

In a current situation where negatives overpower the positives, people have created an opportunity for a win-win situation during this pandemic: a win for the pet and a win for the new owner.

“I think people are looking for comfort and a bit of a distraction to the confusing and uncertain times we are in right now,” Haskell reflected.  “People are confined to their homes and a pet gives them an opportunity for something new and different without having to go anywhere.”