New apps allow students to zoom in on learning 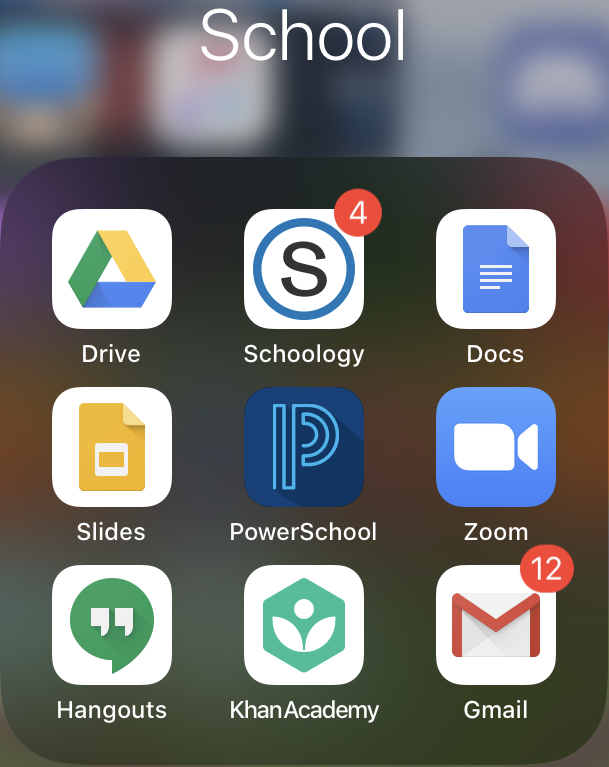 Applications like these have been useful when it comes to online learning.

Since on-campus learning was officially postponed on March  9, teachers have had to rely on online apps to achieve the goal of functional distance learning. Some of these apps were used regularly before the cancellation, and are very familiar to students and teachers, but some are completely new to both and required somewhat of a learning curve to correctly implement into the curriculum.

One of these new apps is Zoom, a video conference app that allows teachers to directly communicate with their classes via video. Zoom is one of the most popular distance learning apps both nationally and worldwide, as it is used by about 200 million people around the world and 90,000 schools.

Mathew Candler ‘21 gave a positive review of Zoom, saying, “So far I like Zoom the most. Some teachers have used other apps, but I feel that this one works the best. The baseball team uses it to have meetings and it works well with almost 30 people in a call.”

Zoom does have an air of controversy surrounding it, though, as it was discovered that due to its sudden spike of downloads, it was unable to properly secure its network. This made the app vulnerable to cyber attacks that would compromise both private meetings and the security of user’s devices.

Zoom said in a statement that it appreciated “the researchers and industry partners who have helped — and continue to help — us identify issues as we continuously seek to strengthen our platform.” They went on to say they were “proactively working to better identify, address and fix issues,” which they did by adding waiting rooms and passwords required before students entire a Zoom room.

One app that was already being used by teachers and students regularly was Schoology. Schoology was already an integral part of Riordan’s academic system, and its importance has been greatly elevated since the start of distance learning. Before the schools shut down, teachers had the option to use Schoology’s services as much or as little as they wanted, but now, teachers have little choice but to rely on Schoology to instruct their students.

Science Department Chair Colleen O’Rourke said, “Schoology has been the hub of everything, as the primary place I post announcements and links to materials all in one location.”

She added,  “I have also been making a lot more use of GoogleDocs as an instructional aid, since I can post links to resources while also providing explanations and context up-front. The collaborative function of GoogleDocs (and other GoogleDrive apps) is very useful as I have been encouraging students to share notes and project drafts with me so I can jump into their files and make comments to give feedback directly.”

“As soon as this all started, I learned how to use it from scratch and have been hosting my own instructional videos and brief lectures there,” she said. “Most importantly, though, there is a fantastic wealth of educational science videos already on YouTube, so I have made heavy use of curating and linking to them to supplement my assignments and instruction.”

“Overall, while this time has been stressful, I think it’s important to see the new learning coming out of it,” O’Rourke said. “Understanding how to communicate digitally and use collaborative documents are important skills here in the 21st century so it’s good our students have time to really focus on learning them now.”