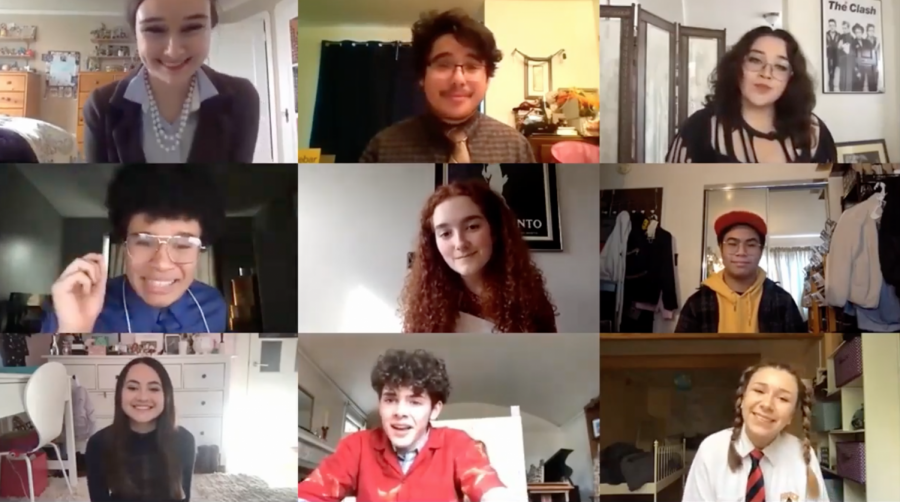 Despite the obstacles with the pandemic, Riordan’s Drama Department performed an amazing show for the community.

While COVID-19 canceled actors worked practically every event under the sun, the Riordan spring musical found a way to survive and thrive. The play, a rendition of the critically acclaimed musical, “The 25th Annual Putnam County Spelling Bee,” was set to be performed spring before the announcement I’ve never of the shelter in place ordinance.

While many considered the quarantine would have put an end to the play, the industrious theatre crew fashioned a unique solution in an effort to continue their passion.

“We had the idea of recording individual videos that could be edited, maybe not for anyone at Riordan, but just something that we could have to remember,” said Jonathan Torrea ’21, an integral member of the theatre program.

While the theatre troupe’s full performance required modification in order to present, this is not the first time they have been robbed of the opportunity to adequately display their hard work and talent. Just last year, the fall play was cut short due to the extensive wildfires ravaging the state, which resulted in poor air quality, and residents were advised to stay home.

Thinking back to these additional cancellations, Torrea replied, “It really stinks because we put all that effort in and are just unable to show it. For the most part though, we’re still happy to have the experience of putting it together… I think what’s great about our drama group is that we’re still willing to put in the effort even if we don’t have as much to show for it.”

The performers were not the only individuals affected by the cancellation, however, as theatre fans were disappointed as well. Thankfully, the news of the online play gave some solace to fans disheartened from constant COVID-related cancellations.

In the words of Miles Poon ’20, an avid Riordan Theatre fan, “I was really looking forward to watching the play in person. I know that the actors worked really hard on it and it’s sad that they can’t perform it live, but I think that this online form is super interesting. I’ve never of anything like it before, so I was looking forward to it.”

Eager drama fans were not disappointed.

The play’s premise, which consists of a diverse group of, shall we say, interesting grade school students, is aptly supported by quality editing, acting, singing and direction. Every actor and actress played their parts convincingly, bringing their characters to life on the small screen.

The acting is so convincing, in fact, that the viewer easily slips into the play’s world of spelling- obsessed adolescents and adults, a collective group so word-focused they make Noah Webster look like a babbling toddler. Perhaps unreasonably, the characters steadily grow in favorability, albeit not relatability, with the audience. Don’t let the goofy and lighthearted exterior of the show fool you, however; beneath the play’s surface lies a hunger- games style spelling deathmatch rife with cheating, lascivious conduct, messages from Jesus, and arguably, attempted murder. The immersive feeling of the play, even through a smaller electronic device, is a testament to the hard work and talent of all those involved.

While the normal boxes of a performance piece are satisfactorily checked, special props must be given to the wonderful editing. Every musical number is assisted by transitioning framed boxes of individual characters, which is not only aesthetically pleasing, but unique to digital format as well.

Audience member Jamar Kittling ’20 noted, “I think the musical turned out remarkably well, especially considering the circumstances…. the vast majority of the story, spicy humor, and overall production were on point.”

The cast certainly had a long haul, but through a valiant show of resilience, they were able to construct a very enjoyable performance.

Reflecting on the conclusion of the play, cast member Alec Douglas ’21 stated, “It took a lot of time and dedication from all the cast members, and thanks to JT’s fantastic editing, I truly believe we made this the best show it could be.”

Although there were significant obstacles blocking the completion of the performance, the cast and crew were able to overcome and continue pursuing this project, resulting in an all- around enjoyable and rewarding experience for the drama department and viewers alike.