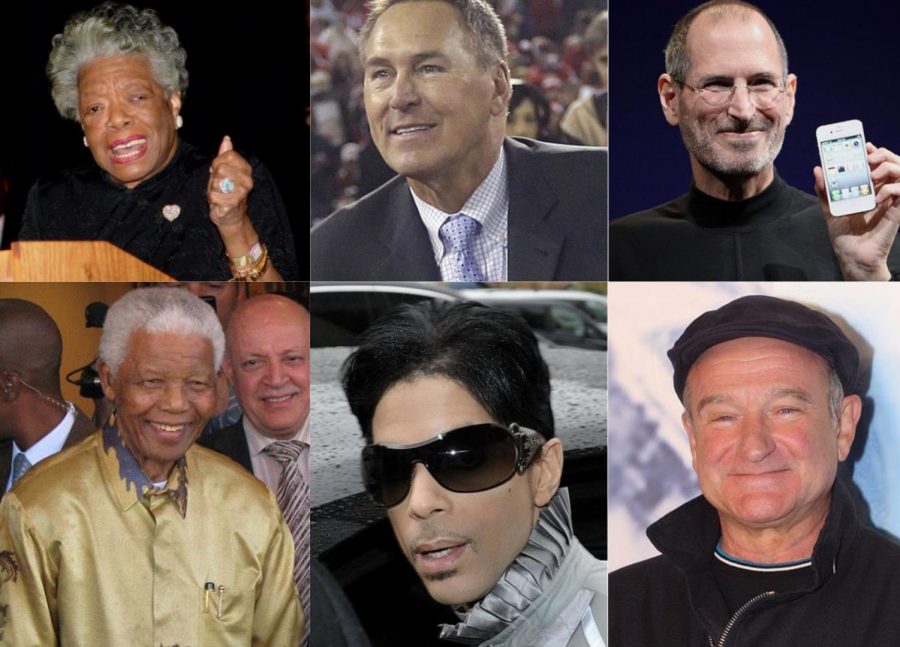 Maya Angelou, Dwight Clark, Steve Jobs, Nelson Mandela, Prince, and Robin Williams were some of the legends we lost in the 2010s.

We lost many celebrities this past decade. Many actors and singers, among others, died in the decade of the 2010s.

An iconic singer from the 1970s, David Bowie, was born in England in 1947. He formed his first band when he was 15 years old and played guitar-based rock and roll. His first hit was the song “Space Oddity” in 1969. He was inducted into the Rock and Roll Hall of Fame in 1996. Bowie impacted the world by making it a more diverse place, both literally and figuratively. He died of cancer on Jan. 10, 2016, two days after releasing his final album, Blackstar (2016).

Whitney Houston, also known as “The Prom Queen of Soul,” was also a famous figure we lost in this past decade. She was born in 1963 in New Jersey. She released her debut album at the age of 22 and scored three No. 1 singles. She is known as one of the best-selling female artists of all time — and one of the most popular musical acts of the 1980s and 1990s. One of her famous hits is “I Wanna Dance with Somebody” released in 1987. A fan of ’80s music, Band teacher Kyle Hildebrant, stated, “Whitney Houston is a big part of that ’80s sound. Without her, the ’80s would not sound the same. She definitely had an impact and was very popular, considering her first four or five albums sold over 80 million copies each. It is unfortunate that she suffered from substance abuse during that ’90s into the 2000s, however she surprisingly did not let that get in the way of her career.” Whitney Houston died from accidental drowning in a hotel on Feb. 11, 2012.

Prince was born in Minnesota in 1958, as Prince Rogers Nelson. His early music career saw the release of his albums Prince, Dirty Mind, and Controversy, which drew attention for their fusion of religious and sexual themes. Proof of Prince’s successful career is that he is a seven-time Grammy winner. Because of his success, the music careers of other singers were impacted, including Justin Timberlake, Pharrell, and Gwen Stefani. Prince died on April 21, 2016, from an accidental drug overdose.

Robin Williams was born in Illinois in 1951. After developing his style as a stand-up comedian, Williams landed his own television show, “Mork and Mindy,” and moved into leading parts in films like “Popeye.” He played numerous film roles, and after three previous nominations, he won an Academy Award for best supporting actor in the film “Good Will Hunting.”  “I use Robin Williams in my Acting class, as an example of amazing vocal elements when in the studio, recording for animations,” said Drama teacher Valerie O’Riordan.  “He is also an inspiration in terms of the range of work he did in his career.  Comedy and improv was definitely his strong suit, but he was also a master of drama (“Patch Adams,” “Good Will Hunting,” “Good Morning Vietnam”) and that depth in his work often seemed to catch us off-guard, as we were so used to his comic genius. Every time I head north over the Golden Gate Bridge I say a little ‘hello’ to the man I remember as Mork on the ‘Mork and Mindy Show’, back in the late ’70s.  The Rainbow Tunnel is dedicated to Williams, so people the world around are reminded of his sweet soul when they pass through.  I’m sure that stand-up comedians are inspired by him and how he could think of crazy and funny things off the top of his head and leave people laughing and laughing.  Finally, he had a serious impact on those who suffer from depression and seem to be the ‘life of the party’ but have painful demons that haunt them, deeper than what we see on the surface of their genius.” In August of 2014, Williams was found dead in his home in Tiburon, California.

Stan Lee was born in NYC in 1922. A  comic-book creator, he co-launched superheroes like the Fantastic Four, Spider-Man, Doctor Strange, and the X-Men for Marvel Comics. Stan Lee went on to work for the company that would eventually become Marvel Comics. He died on Nov. 12, 2018.

Born in 1929, Dick Clark was a TV personality known for the shows American Bandstand, $25,000 Pyramid and TV’sBloopers and Practical Jokes, among others.  One of his most famous shows, Dick Clark’s New Year’s Rockin’ Eve, began in 1972 and is still running every year on Dec. 31 with Ryan Seacrest currently hosting. Clark died on April 18, 2012, at age 82.

Muhammad Ali, “The Greatest,” born in 1942, became one of the most famous professional boxers of the 20th century. He became an Olympic gold medalist in 1960 and the world heavyweight boxing champion in 1964. He was diagnosed with Parkinson’s disease in 1984. In his retirement, Ali devoted much of his time to philanthropy. Ali had nine children, including boxer Laila Ali. He supported many foundations including the Make-A-Wish foundation. Even though he is not a huge boxing fan, Strength and Conditioning coach Ryan Jones ’09 said, “Ali was more than just one of the greatest boxers to ever live, he used his platform and fame to stand up against social, political and racial injustice. He was a juggernaut in the ring, winning multiple heavyweight titles, putting him amongst the greatest to ever step into the ring. He stood up for racial discrimination and openly protested against the Vietnam war.” Muhammad Ali died in 2016 because of a respiratory issue.

Willie McCovey, known as “Stretch,” “Mac,” and “Willie Mac” played with the San Francisco Giants as a first baseman for 19 seasons. Among many other awards, he was a 6-time All-Star and 3-time National League home run leader. He was inducted into the National Baseball Hall of Fame in 1986. When the Giants were playing in Candlestick Park, McCovey launched 231 home runs, the most hit in that park by any player. McCovey died in 2018 at Stanford Hospital after being hospitalized for an infection the previous week.

Dwight Clark was a wide receiver who played nine seasons with the San Francisco 49ers. He was part of the 49ers first two Super Bowl championship teams. He had a total of 506 receptions and 6,750 receiving yards during his career. Clark caught the famous pass from Joe Montana during the NFC Championship game against the Cowboys in 1981. Immortalized as “The Catch,” this propelled the 49ers to their first Super Bowl championship. The cause of the death for Dwight Clark was ALS, also known as Lou Gehrig’s disease.

JD Salinger was a writer who is best known for his novel The Catcher in the Rye. The book was published in 1951 and became an immediate popular success. It was widely read despites its  controversial themes. He followed this by a short story collection and novellas. Salinger died in 2010 at age 91 from natural causes.

Maya Angelou was a poet, singer, memoirist, and Civil Rights activist. She published seven autobiographies, three books of essays, several books of poetry, and is credited with a list of plays, movies, and television shows spanning over 50 years. The first of her autobiographies, I Know Why the Caged Bird Sings (1969), tells of her life up to the age of 17 and brought her international recognition and acclaim. Her books center on themes such as racism and family. “Maya Angelou was very impactful in the field of literature because her style of writing is straightforward and can be understood by many.  She is also socially influential in terms of being a powerful, and yet, still relatable public figure.  She did much public speaking and her addresses were positive and inspirational.  She left behind a prolific legacy, which will continue to be honored,” stated English Department Chair Mary Dalton. Angelou died in 2014 at age 86 due to poor health.

Toni Morrison was a novelist, essayist, book editor, and college professor. Her first novel, The Bluest Eye, was published in 1970. Then, Song of Solomon (1977) brought her national attention and won the National Book Critics Circle Award. She won the Pulitzer Prize for her book Beloved, and the Nobel Prize in Literature in 1993. She earned the Presidential Medal of Freedom from President Obama. She died in 2019 in NYC.

Steve Jobs was a business magnate, industrial designer, investor, and media proprietor. He was the chairman, CEO and co-founder of Apple Inc., the chairman and majority shareholder of Pixar, a member of The Walt Disney Company’s board of directors following its acquisition of Pixar, and the founder, chairman, and CEO of NeXT. Jobs presented the iPhone to the world on June 29, 2007. He resigned as CEO of Apple in 2011 because of health issues after he was diagnosed with cancer. Antonio Maffei ’20 said,“Steve Jobs has changed the way we use technology. He made it more simple but yet effective. Not only did he do that, but he also innovated the movie industry with Pixar. Jobs forever changed music, animated movies, smartphones, personal computing, and retailing industries. Apple continues to put out products that Steve worked on before he passed and will continue his revolutionary legacy.” Jobs died in 2011 due to neuroendocrine cancer, six weeks after stepping down from Apple.

Steven Hawking was an English theoretical physicist, cosmologist, and author who was director of research at the Centre for Theoretical Cosmology at the University of Cambridge at time of his death. Hawking was the first to set out a theory of cosmology explained by a union of the general theory of relativity and quantum mechanics. He was the Lucasian Professor of Mathematics at the University of Cambridge between 1979 and 2009. His health declined in 2018 and his resting place is Westminster Abbey in London.

Katherine Johnson was an American mathematician whose calculations of orbital mechanics as a NASA employee were critical to the success of the first and subsequent U.S. crewed spaceflights. During her 35-year career at NASA, she earned a reputation for mastering complex manual calculations and helped pioneer the use of computers to perform the tasks. The space agency noted her “historical role as one of the first African-American women to work as aNASA scientist.” She was awarded the Presidential Medal of Freedom in 2015 by Barack Obama. She was portrayed by Taraji P. Henson in the 2016 film “Hidden Figures.” Johnson died in February at age 101.

Neil Armstrong was an American astronaut and aeronautical engineer, and the first person to walk on the Moon. He was also a naval aviator, test pilot, and university professor. His famous words on the Moon were, “That’s one small step for man, one giant leap for mankind.” Jamar Kittling ’20 stated, “Armstrong had an immense contribution to the field of astronomy. Neil Armstrong and Edwin Aldrin’s success in the Apollo 11 mission secured a victory in the Space Race, bolstering NASA’s reputation and opening up the possibility for future space missions and endeavors that had more discoveries. Armstrong’s pioneering leadership and initiative assisted in securing the future of space exploration.” He died in 2012 at age 82.

Nelson Mandela was a South African anti-apartheid revolutionary, political leader, and philanthropist who served as President of South Africa from 1994 to 1999. He was the country’s first black head of state and the first elected in a fully democratic election. His government focused on dismantling apartheid. After leading a campaign against the government, he was arrested and sentenced to life but was released in 1990 after mounting international pressure. Mandela died in 2013 in South Africa.

John Glenn was a Marine Corps aviator, engineer, astronaut, businessman, and politician. He was the first American to orbit the Earth, circling it three times in 1962. Following his retirement from NASA, he served from 1974 to 1999 as a United States senator from Ohio, and, in 1998, flew into space again at age 77 in Space Shuttle Discovery. Glenn, the oldest and the last surviving member of the Mercury Seven, died in 2016 at the age of 95.