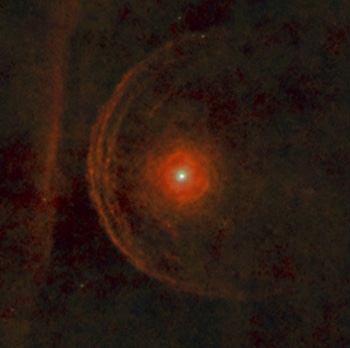 This infrared photo shows the star Betelgeuse, in the shoulder of Orion, about to collide with a nearby gas cloud.

Within the past months, the star Betelgeuse has grown extremely dim, causing some wild speculation about the possibility that it is about to go supernova. Immediately, these theories were squashed by many notable astrophysicists, but that doesn’t mean the dimming we see is uninteresting.

The star Betelgeuse (commonly pronounced Beetlejuice) is found in the armpit of the constellation Orion. This is where it gets its name, which comes from Arabic and could mean one of several things, including “Armpit of Orion”. It is considered a variable star, meaning that its brightness regularly and irregularly increases and decreases.

Physics teacher Tony Dunn is unconcerned with the unusual dimness, stating that the star is probably fine and the “Media’s not gonna miss out on an opportunity to dramatize any kind of story.”

Science Department chair Colleen O’Rourke also found the coverage to be unnecessary. O’Rourke specifically pointed out that, “at 700 light years away, Betelgeuse is far enough that the exploding corona of radiation will be largely diffused by the time it reaches our solar system,” meaning that the explosion will not affect us on Earth.

Even further, O’Rourke stated that the dimming of the star was more likely caused by a perfectly normal phenomenon. For example, the star may be dimming naturally as multiple dimming cycles coincide, or it could be a large cloud of gas that happened to obscure the star slightly. This is supported by recent events.

Astronomers Emily Levesque and Philip Massey have determined that the star’s dimming cannot be due to a drop in temperature. Because the Star has not cooled significantly enough to explain the dimming, it is assumed that a cloud of dust is simply limiting the light we see from the star.

Regardless, as Science teacher Michael Hickam put it, “all stars have a shelf life,” and Betelgeuse will eventually blow.

Unluckily for supernova enthusiasts, most astrophysicists have put its remaining life at 100,000 years at least.

Nevertheless, some media outlets, “got in on the hype” as Dunn put it, printing rather dramatic headlines that seem to contradict the opinions of the scientific community. These headlines are almost all clickbait, and should not be taken seriously. Additionally, the dramatized headlines have begun dropping off, and more accurate ones have appeared as new information surfaces.

As O’Rourke put it, “The death of stars is the birth of life, since it creates and scatters the heavier elements necessary to form the basis of living things… To see it happen would be a solemn reminder that while the life of our own sun will also end someday, in its way it may create something new and wondrous from the ashes.”