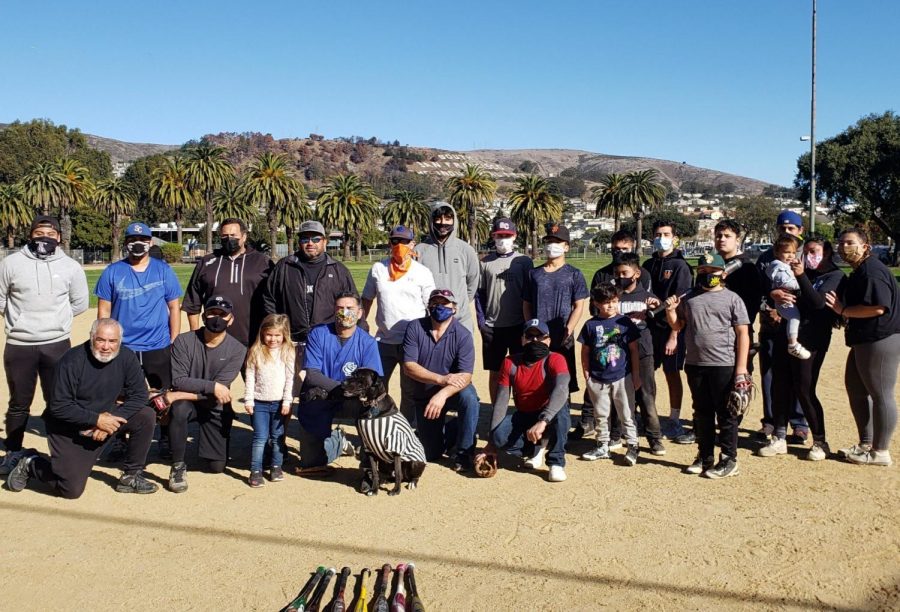 In a change to their traditional Thanksgiving family football game, members of two South San Francisco families switched it up to softball to avoid contact during the COVID pandemic.

Due to COVID-19 and its restrictions, many groups, such as this one from South San Francisco, have to adapt and limit specific holiday traditions to spend time with one another in safe ways. Instead of a physical football game, a softball game was held to keep players safe, while carrying on an important tradition.

On Nov. 26, 2020, South San Francisco fathers, Troy Hartman and Darren Camilo held their very first Kids vs. Parents Thanksgiving softball game at Orange Memorial Park. The group usually played a friendly two-hand-touch football game, but due to COVID-19 concerns, the group had to rethink their plans. The two eventually decided that softball would be the best choice, as it limits contact and maintains a safe distance between people.

As Troy Hartman, Third Baseman for the Parents, stated, “It’s too bad we couldn’t hold our annual football game, but I enjoy softball just as much. Softball limits physical contact, too. Plus it’s easier to keep up with you kids in softball.”

Darren Camilo, Right Fielder for the Parents,  added, “We had to find a way to keep this tradition alive; it’s been going on for eight years! Softball will have to do until next year’s football game. I just have to show off my cannon as a right fielder instead of as a quarterback.”

Before Thanksgiving 2020, the friendly football games brought out everybody’s competitiveness, as both teams held a record of four wins and four losses. This softball game was no different, as both teams went back and forth between innings, fighting to take a standings lead and the highly coveted bragging rights that come with a win.

Despite the Parents taking an early two run lead in the first inning, the Kids slowly took back the lead with four runs of their own until the third inning. For the next two innings, both squads played exceptional defense fueled by diving stops and driven catches, and it seemed that the aggressive bats seen in the beginning of the game were nowhere to be found. Knowing that the game was still early, the Kids powered through and eventually built up their lead with two more runs in the fifth inning, with timely hits from shortstop Wyatt Hartman and catcher Aisea Scheller.

“I just approached the plate looking to put a ball in play with solid contact, and I also remembered to look for that one pitch. Thankfully, I hit it straight up the middle to drive the runner home from third,” stated Wyatt Hartman.

Scheller said, “I just wanted to hit a rocket to be honest. It was kinda hard though since they were throwing it slow. But when I got that one pitch, I swung for the fences and it worked.”

The Kids’ four-run lead did not last for long, as their own defense crumbled beneath them. Misplayed balls and inaccurate throws allowed the Parents to chip away and eventually take a four run lead in the sixth inning.

Heading into the seventh inning, the Adults were winning 10-6, and the pressure was high for both teams. While the Adults were three outs away from closing out the game, and the Kids were fighting against a four run lead with their solid bottom half of the lineup leading off the inning. Determined to make a comeback, hitters Beto and Chris Camilo drove in two runs to slim the score to 10-8.

With runners on second and third base, but two outs, Eric Camilo was up to bat. Two pitches into the at bat, Eric hit a line drive to right field to drive in one more run. However, a spectacular outfield throw from Darren Camilo, Eric’s father, resulted in the tying run, Luke David, getting caught between third base and home plate. Despite attempts to fake out defensive players, David was eventually tagged out, ultimately completing the Parents’ comeback.

Despite there being winners and losers, both teams came together to share moments from the game, greet one another after the performance, and take a group photo. From the comments and responses, it was obvious that the temporary transition to softball was a great hit.

After the game Wyatt Hartman said, “Obviously the game didn’t end up in our favor. We had too many costly errors, but at the end of the day this game was just for fun. It did get competitive, but it was fun playing with my friends, and against my dad (Troy Hartman).”

Finally, co-leader of the event, Darren Camilo, responded, “The change from football to softball was different, but really fun. Not only did I get a few hits and make a few plays, but the Parents still proved to the Kids who’s boss. Above all though, we got to have fun with our friends and family on a day that’s meant to cherish each other. These games are great.”