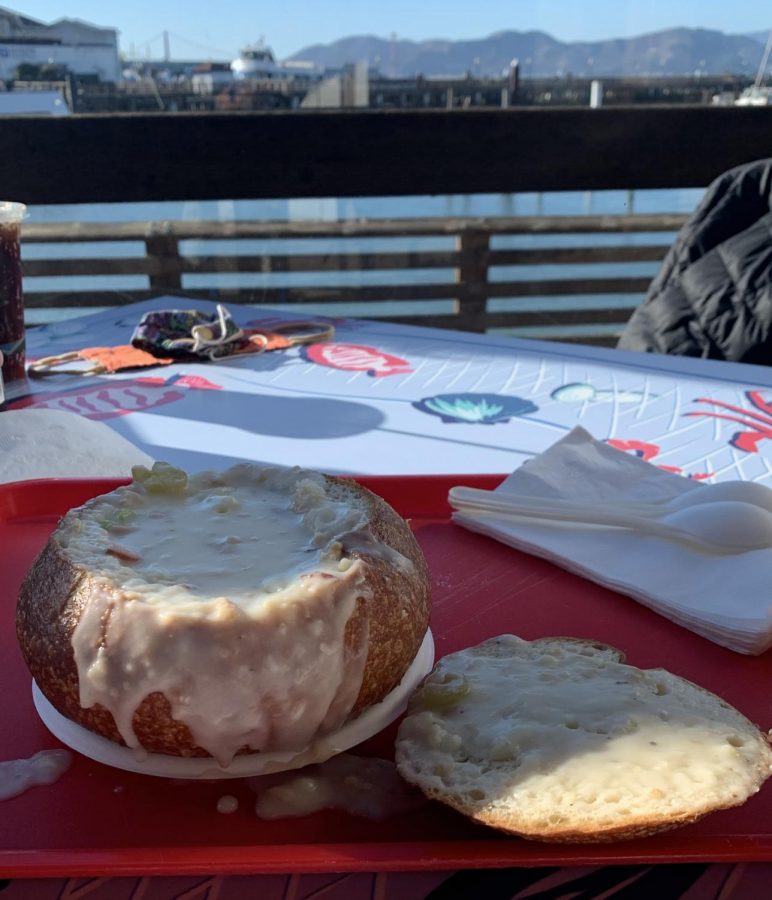 Clam chowder in a French bread bowl is a San Francisco tradition, whether you are a native or a tourist.

Any San Franciscan knows Japantown Peace Plaza is the go-to destination to explore Japanese culture. The authenticity, wide-price ranges, and atmosphere make the experience so desirable. The area has amazing restaurants, some even specializing in udon. Well, if you’re new to the area or, in need of recommendations, visit Udon Mugizo.

Inside the Plaza, on 1581 Webster Street, you’ll find the best place for comfort food. Recently, before the Department of Health shut down restaurants, I decided to eat there for dinner with a friend. Despite Covid-19 regulations, I was still able to safely dine inside. The exterior of the restaurant is adorable. It captures the appearance of a traditional Japanese building.

We were seated right away and my food was delivered in under five minutes. Can’t say I was surprised, how good my meal was, considering the restaurant particularly sells different variations of udon.

I ordered myself the Hot Beef Sukiyaki Nabeyaki Udon, which includes: a poached egg, thin beef slides, enoki mushrooms, onions, fish cake, napa cabbage, and green onions, all in a clay pot. As a first-time customer, I was beyond satisfied; the broth was perfect and the meat wasn’t too fatty. I definitely recommend making the trip.

When thinking about the famous clam chowder in a sourdough bowl at Fisherman’s Wharf, people tend to think of getting one at the Boudin Bakery, known for their sourdough bread. But, the original sourdough clam chowder bowl is at Chowder’s, located near the entrance of Pier 39.

At Chowder’s, you can choose between either white (Boston) or red (Manhattan) clam chowder for the price of $10. I got the original white clam chowder in the bread bowl.

The chowder comes with “loads of clams, fresh celery and onions, potatoes and crispy bacon.”

First, I tasted the lid of the sourdough bread bowl, and it wasn’t that sour; it tasted more like French bread, which I was fine with, but some might not be. When first tasting the soup, it was hot and I immediately tasted the “loads of clams.” I was very happy since most of the clam chowders I’ve had, have lacked clams.

Then came the amazing flavor of the soup, which was not too thick or not too watery, a very good happy medium. A couple of sips in, I noticed the extremely crunchy celery and the soft potatoes, but didn’t taste any onions and only a hint of bacon. Also, I noticed that there wasn’t much chowder in the bowl, and was almost empty after about 10 spoonfuls. Towards the end however, the soggy bread inside the bowl added a creamy texture to the meal and it was very good.

My final thoughts of the clam chowder from Chowder’s are that they make a really good clam chowder and paired with the sights of the bay, make for a very good experience. However, they need to step up their bacon and onion game and add more chowder to the bowl. I give it a solid 4 out of 5 stars.

Due to COVID-19, all seating is outdoors, which isn’t a bad thing since there is a patio that overlooks the San Francisco Bay, where you can enjoy your food while taking in a great view of the bay, unless it’s foggy. However, when sitting in the back patio, don’t be surprised if you are greeted by some seagulls, and if it is a windy day, there is an extreme wind tunnel. Those were the only two downsides from the outdoor seating I noticed.

Located on 723 California Drive in Burlingame is a casual restaurant named Hanabi, which serves Japanese plates such as ramen and curry. With Japanese food being my favorite cuisine, I was ecstatic to see what this small restaurant had to offer.

I went to Hanabi on a weekday night right before the dinner rush. Although the pandemic is still around, Hanabi does their part to keep everybody safe by keeping indoor dining to a minimum, and also offering outdoor dining and takeout.

Upon entering the small but cozy establishment, I was welcomed with a mask-wearing waitress who politely guided me to a table and served me a glass of water. She then gave me a colorful menu, which presented me with their wide range of appetizers, ramen, and curry dishes.

As soon as this steamy bowl was served, I was ambushed by smoky aromas and neutral tones of brown and green. Upon first bite, I was greeted by the gentle noodles and the subtle saltiness of the ramen soup, and I could not wait to try more. With the next bite, I was greeted by a better combination than before, which consisted of tender pork, sweet corn, and the crunchy fried onions. It seemed that this dish offered me so many different combinations with each bite, with some being led by the rich soup, soft noodles, or tender pork.

All in all, Hanabi is a wonderful Japanese restaurant that I would recommend to anyone who truly enjoys genuine Japanese dishes. This establishment has food for all, as they serve simple dishes and unique plates. Although the food can get pricey, I do believe that the price is a reflection of the quality of Hanabi’s service and food. Be sure to try Hanabi for yourself when you are in the Burlingame area or in the mood for savory Japanese cuisine.

Oasis Vietiamez Cuisine, on 549 Oceana Blvd., Pacifica, has been in business since only 2017 and features Vietnamese foods like Pho, Rau Muong, and Crepe yet also have other delicacies like shredded pork and duck stir fry, and a wide range of vegetarian options.

I chose to get the most popular dish, the beef pho. However, this dish was not outstanding, compared to other pho’s I’ve had previously, even though it was still good. The broth, being a golden brown hue and being the best part, was delicious. It had a fantastic comforting aroma and had felt silky as I sipped it.  Though green, the vegetables tasted old and were too chewy; adding on, the beef tasted good, yet there was too little and was too thinly cut to properly match the given amount of broth and deliver the pho extra flavor. Lastly, the noodles were made correctly and did their job, yet their flavor and texture were not extraordinary.

Additionally, their interior was not impressive. It was bland and felt sad. Luckily, due to Covid-19, the interior won’t be available as the restaurant is now only serving to go. Secondly, the hospitality of the servers was professional as they were all friendly people. Another significant aspect of this restaurant is that the food only took 15 minutes from our online order to our hand, which was surprising, considering they were quite busy that day. Overall, the decent food and timeliness of the workers made Oasis Vietnamese Cuisine a positive experience. Out of five stars, Oasis Vietnamese receives a total of 3.5. A large Beef Pho costs $8.