The Legend of Riordan’s Lost Pool 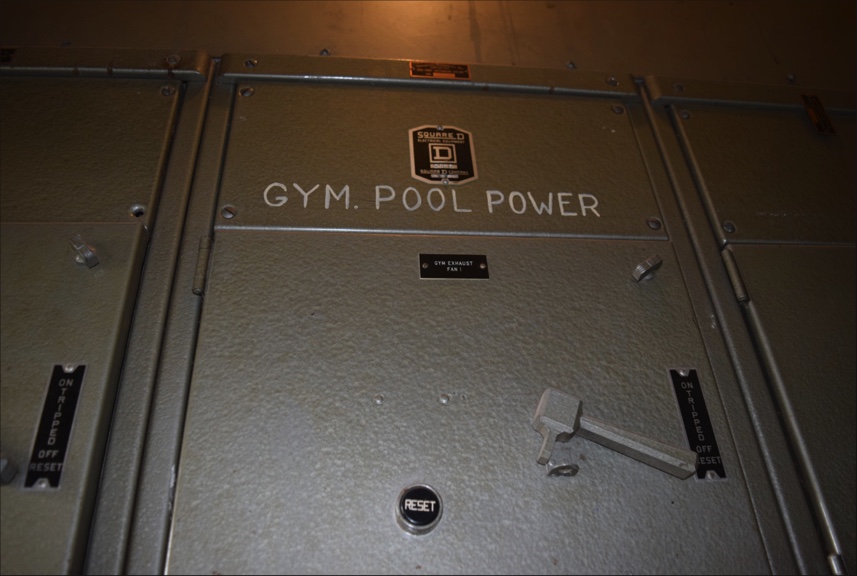 The power supply for the pool still exists, even though the pool does not.

At the time when Riordan was in its humble beginnings, many future students had high expectations of what the finalized product of the school would look like. There were plans detailing how the school would be built, including the school buildings that Riordan currently has now: the administrative offices, auditorium, chapel, theatre, gym, and the cafeteria.

The enrollment that Riordan had back then justified the construction of a South Classroom wing that can be added, just adjacent to the gym. What most Riordan students, past and present, still talk about is the abandoned project, which morphed into The Legend of Riordan’s Lost Swimming Pool.

According to the Young Men Dream Dreams book, the pool would’ve been located where the wrestling room is now, near the weight and locker rooms. Why didn’t these aquatic dreams become a reality?

When it was announced that the plans for Riordan’s campus included a swimming pool, students who were among the first to attend felt the excitement at what the finished product would look like.

Robert Woodcock ’53, shared his student memories from the day he became a freshman. He chose Riordan because “We were promised a swimming pool.”

According to the book Young Men Dream Dreams, by Bro. William Bolts ’53. The book, written to commemorate the school’s 50th anniversary, recounts the early days of Riordan. This book shows the preliminary designs of what the architectural plans for Riordan were, as well as early memories of the school itself.

Bishop James Thomas O’ Dowd, former Archbishop in the Archdiocese of San Francisco inthelate40stotheearly50s had a role in the “legend” of the lost pool. Ron Isola ’61, who graduated a decade after the school was completed, said, “The Bishop’s goal was to make the Riordan campus a premier site of the archdiocese, including a superb gymnasium and a first class auditorium.”

He added, “Unfortunately, the reason why the pool wasn’t completed was because Bishop O’ Dowd passed away before the completion of the project. The new archbishop, Archbishop John Joseph Mitty decided to finish the project without completing the pool. It is considered to be the ‘legend of the pool.’”

Isola said, “If the pool had been completed, I’m sure that Riordan would have a competitive swimming program to go along with the other sports that are offered. The school has just completed an outstanding renovation of the gymnasium, the locker rooms and field complex.”

Brian Kelly, Director of Activities, looked at the possibility of having a pool at Riordan. He said, “I think if we had a pool, it would have affected how the rest of the campus was structured, how the entire campus operates, and probably we would have to hire a couple positions to run the pool… so it would be quite different.”

Kelly stated that Riordan already has a coed swimming program. “We actually have a coed swim program now, coached by Gwendolyn Dornan. Our practices will be held at Balboa Pool, and our events are held at the various WCAL campuses with pools. So having a pool would make everything a bit easier.”

Development Director Simon Chiu, who formerly worked at and graduated from St. Ignatius College Prep (which has a pool), said, “A pool seems to be better than it looks. The costs of running the pool, in many ways, outweigh the benefits it may have for the school. We don’t have the size of the student body and the interest in swimming/aquatic sports to benefit from the costs of running a pool.”

Chiu added, “We do not have plans for a pool in any of our current thinking for the school. I think there are lots of other projects we would do first, such as renovating the classrooms, painting the hallways, renovating both of our courtyards, looking at how to expand the bandroom, and renovating the cafeteria.”