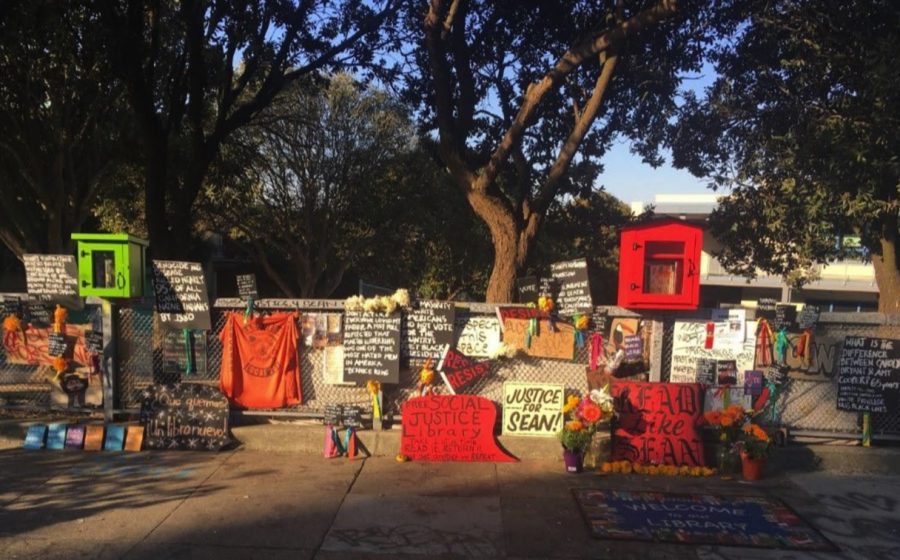 The Sean Monterrosa Knowledge Up Library honors the slain man.

On Nov. 1, the Sean Monterrosa Knowledge Up Library had its grand opening in front Junipero Serra Elementary School with little libraries posted up around the school. These libraries were established in memory of Monterrosa, who was shot and killed near Vallejo  while he was kneeling on the ground, with his hands up. Police and news reports state that a hammer was mistaken for a firearm.

On June 2, at the age of 22, Monterrosa was fatally shot and killed by Vallejo Police Officer Jarrett Tonn, according to reports on the investigation. The shooting of Monterrosa happened outside in front of a Walgreens in Vallejo. When police arrived  at the scene, Monterrosa cooperatively kneeled to the ground and put his hands up, according to witnesses. The officer reportedly noticed something on him that appeared to them to be a firearm.

Officer Tonn fired five shots towards Monterrosa, one of them hitting and killing him. The police then noticed that it wasn’t a firearm, but a hammer. Body camera video of the incident has since been released. To date, he has not been fired or arrested.

Monterrosa’s family, friends, and supporters have mourned his death, but their pain and desire for justice has only motivated them to have their voices heard.

Michelle and Ashley Monterrosa, Sean’s sisters, have made it clear that justice is far from being served as they continue to protest and speak up for their brother. Oakland attorney John Burris has filed a federal civil rights lawsuit against the city of Vallejo and against Officer Tonn on behalf of the Monterrosa family.

Sean Monterrosa was an extremely intelligent person. Many describe him as being incredibly hard working and a very humble person. “He was quiet with a powerful presence,” says Nancy Abdul-Shakur, one of Monterrosa’s mentors from a program he attended called Horizon Unlimited SF.

Abdul-Shakur met Monterrosa back in 2014 when he was around age 16 to 17. He spent two years in the program where she got to know him, and they created a bond.

“Sean had a contagious laugh,” she said.  “No one had a straight face when he laughed in a room. He was also very quiet. This could be confused with being detached, but Sean was rarely not connected to what was going on around him. He almost always had an insightful perspective of things. I attribute that to his introspection, and stillness. He was always very present.”

Sean was deep and thoughtful. He cared a lot about issues within his community and around the world. Helping and caring for others was something Sean was passionate about. He wanted to help others succeed and make the world a safer place for youth.

“I had the privilege of teaching Sean hard/soft skills in workforce development. Early on I knew Sean was special…. He cared about the issues plaguing his community. Social Justice issues were important to him. During his last year with us he challenged himself to apply for a Coordinator-in-Training youth leadership position at Horizons. During his interview he spoke so much about being a role model to other young people who struggled in the system, like him.  Needless to say, he was hired, and spent the last year of his tenure with us, co-facilitating workshops, supporting and mentoring his peers, as well as planning events, field trips, and programming for our youth,” said Abdul-Shakur.

Since Monterrosa’s death, a GoFundMe has been set up for a Memorial Library in his honor. The sisters and their longtime neighbor Lisa Bishop, a teacher librarian for more than 30 years, and is currently a librarian at Aptos Middle School, came up with the idea of a memorial library in Sean’s honor that is known as the Knowledge Up Library at Junipero Serra Elementary School.

“After Sean’s death, I attended a rally at 24th and Mission streets. One of Sean’s mentors at Horizons Unlimited spoke about Sean and how he was ‘Knowledging Up’ and how he loved to read. I have known Sean since he was 5 years old. I’ve known his sisters and family for a long time as well…. Sean loved to talk with me about reading, he knew I was a Teacher Librarian so we had great discussions about reading,” said Bishop.

They have chosen that location because Sean, Michelle, and Ashley grew up in Bernal Heights where they all attended Junipero Serra Preschool as well as the elementary. Their roots run deep in Bernal/Holly Park Circle, which is why they chose that location. But, they don’t plan to keep the libraries all in one spot.

“Our plan is to continue to put Knowledge Up Libraries all around SF in neighborhoods who don’t have any,” said the creator of the Justice4Sean Instagram page, whose purpose is to advocate for Sean.

The Knowledge Up Library’s purpose is to highlight who Sean was. According to sources, he was an avid reader and would read mostly social justice books. “There was one semester in high school where Sean read over 50 books. He was always hungry for more literature. Reading is what shaped him to be the person he was,” said the creator of the Instagram page.

One of the library’s goals is to encourage young people to read books within those realms as they help and prepare them for what this world throws at them. The library includes titles for toddlers all the way to adult books with genres that include social justice, healing, acknowledging whiteness, and so on. Authors in the library go from Gloria Anzaldua and Cherrie Moraga all the way to Ta-Nehisi Coates.

“Sean always said knowledge is one thing that no one can ever take from you,” reads the Instagram page.

Supporters hope that Sean Monterrosa will always be remembered for his passion to help others and for his love of literature. He was a person whose life was taken very early, and had so much potential to make a difference in the world. While friends and family say justice has not been served for him, they will keep advocating and fighting for him. They hope his Knowledge Up Library will inspire many and help explain to youth the world they live in today is not perfect, and that there needs to be change.

“I believe that Sean’s legacy is one of seeking knowledge of self. He was always learning. And once you have knowledge of self, you find love for yourself, and therefore your people,” said Abdul-Shakur. Sean’s legacy is one of unity…. In the end, his life and death will cultivate a path to solidarity between all oppressed peoples in San Francisco, in this country, and across the globe.”