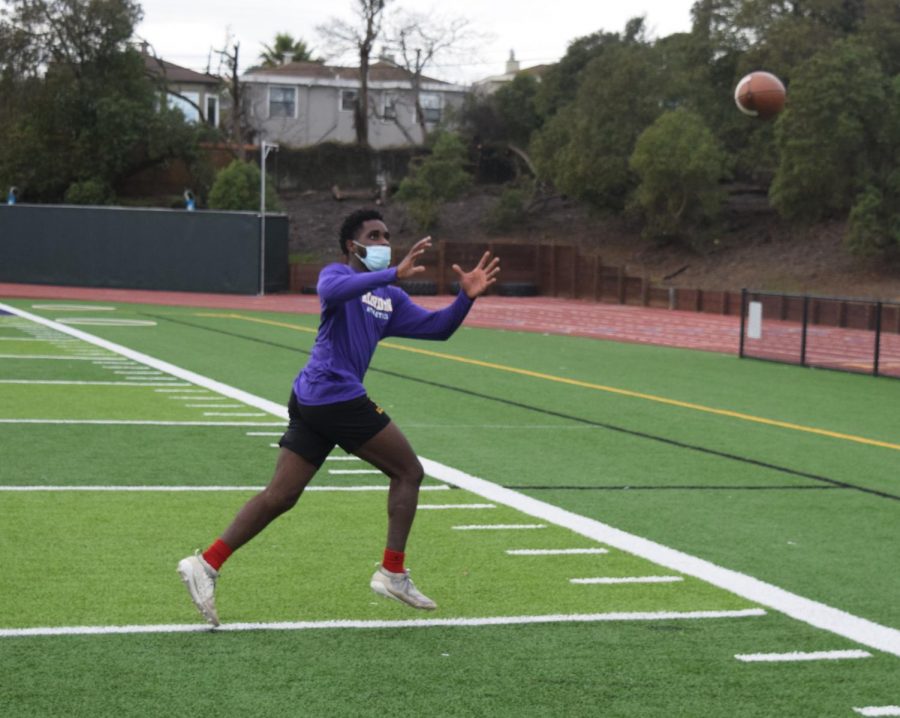 Christopher Murray '22 catches a pass at the sidelines during workouts.

“I expected both programs to be competitive this season. The football team made some strides last season and were plays away from being 5-5 and making the playoffs. Although some key contributors graduated, we are returning a lot of players,” said Athletic Director Jay’Sen Morris ’07.

“The cross country team had a great year last year,” Morris said. “They lost some strong runners due to graduation, but there is a lot of talent in the program. Coach Willers does a great job of getting the most out of the runners, which will not be any different this year. It will be an exciting year with the addition of girls competing this year…Regardless of the sport, the WCAL is a tough league from top to bottom; however, we will be right in the mix this year.”

In the first year under Coach Mark Modeste, the Archbishop Riordan Football Team went 3-7(1-6), but the record does not reflect their achievements.

The team fought through a lot of adversity and were a play or two away from winning in three of their close losses and starting 5-1(2-1). These fourth quarter heartbreaks led to a downfall trend in their last three games before capping off the season on a huge and era-defining blowout versus rival Sacred Heart 44-7. That Senior Day spectacular performance helped the Class of 2020 to leave on a high note, as well as showing optimism for the future of Riordan football on a new field.

Another reason for optimism this season is all the experienced players in the second year of the system. Quarterback Azaan Ledbetter ’21 and Running Back Fazon Ruth ’21 both began their first full season as starters last season at the varsity level and these seniors should now look to improve even more from their impressive numbers last season, and lead their team to huge successes.

“I think, if anything, this situation with the pandemic and all of the unknowns and changes of schedules they have dealt with has shown me that the student-athletes and the coaches have a great ability to adapt and be flexible depending on the situation, which are always valuable skills, but necessary in our current world more than ever…” said  Athletic Director Bob Greene.

“The potential of the football and cross country teams, especially at the varsity level, is high,” Greene added. “What will that mean in terms of wins or losses, is unknown, but we expect to be able to meet the challenges of our schedule.”