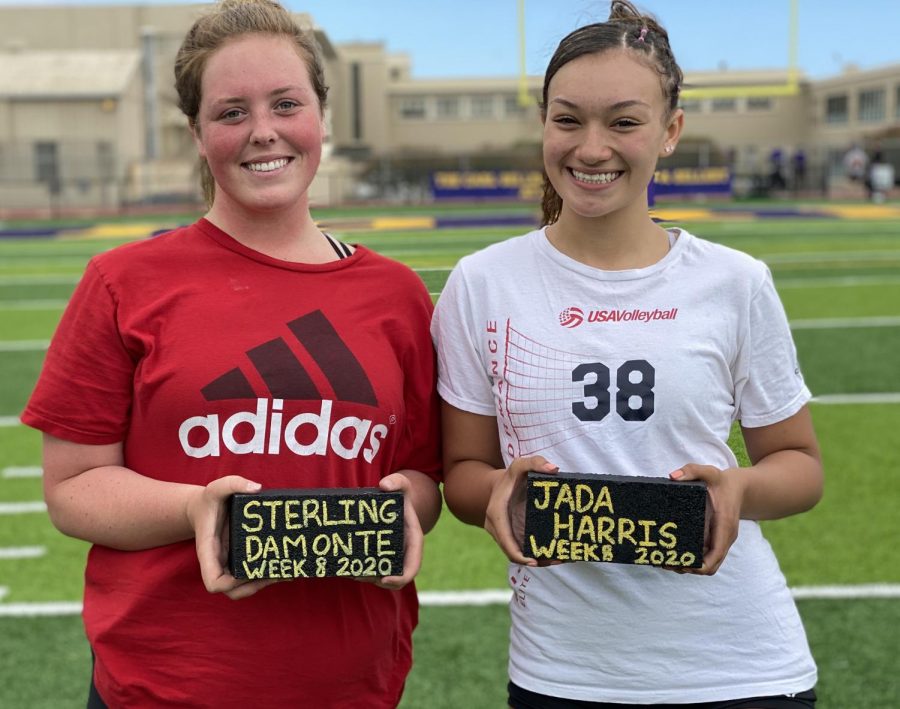 Sterling Damonte ’22 and Jada Harris ’21 were the first female athlete to earn bricks.

Throughout the seasons and off season workouts, athletes work toward personal and team goals that sometimes results in tangible awards.

Ryan Jones ’09, Riordan’s Strength and Conditioning Coach, started an award system of bricks in 2019. Coach Jones explained these awards as a metaphor, as bricks are seen as building foundations.

This award system has become a drive for many athletes, as well as something special for Coach Jones.

“It’s something I do personally,” Jones said. “I go and spray paint them and write the names- that’s all me.”

Over the summer, during off season workouts, Elizabeth Watters, Riordan’s women’s varsity volleyball coach, became involved, and the athletes in the volleyball and basketball programs received recognition for outstanding sportsmanship and ability.

Coach Watters expressed that when evaluating the athletes, main qualities looked for were  “The student-athlete who hustled in every drill, responded and adapted to coaches’ feedback, and encouraged others to work hard around them.”

Coach Jones also made clear that no gender was singled out when deciding. “The award had to be earned—it could’ve been four girls, four boys or two and three.”

For the 2020-2021 school year, female athletes have already started showing their hard work, discipline and coachability.

Jada Harris ’21 and Sterling Damonte ’22 were the first of the nine ladies who received bricks. Sophia Carrasquilla ’22, Aliyah Holmes ’23, Abby Donovan ’22, Delaney Mulqueen ’22, Riley Manlulu ’23, Hailey Westall ’23 and Carly Guevarra ’23, make up the rest of the group of female athletes who have made their mark on the Crusader Athletics foundation.

Seeing as this is a one of many firsts for Riordan High School athletics, the coaches are holding these girls to higher expectations.

Coach Jones said, “I do have high expectations of the girls who did earn a brick because they have proven they have the three main qualities—now with that my expectation is, to be on a higher level team, to be a leader and an athlete who stands out.”

Coach Watters added, “My expectation is that they continue to push themselves and their teammates to be better. As a growing program, we want all of our student-athletes to progress in both strength and skills.”

In regards to future athletes, Coach Jones said, “Honestly, just show up, work hard, be coachable. Don’t wait till the season to get better, take the off season and treat it as seriously.”

Coach Watters added, “We want all athletes to work tirelessly to meet those expectations, to better themselves and our program.”

This tradition has awarded 108 bricks to student athletes so far. Even though the workouts have taken a pause and the seasons have been delayed, both Coach Jones and Coach Watters intend to keep giving opportunities for an award.