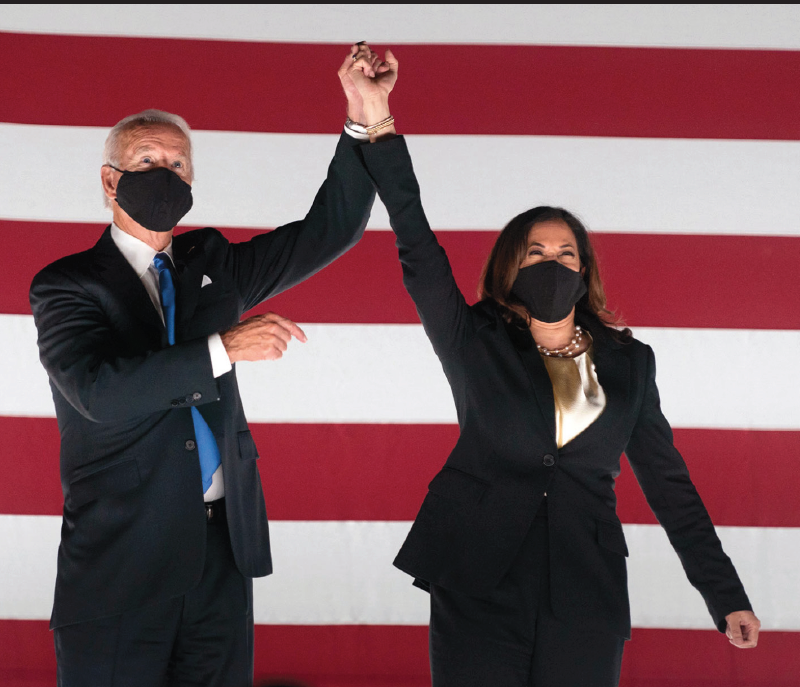 After a long campaign against Donald Trump, Biden has won the majority of the Electoral College with 306 electoral votes against Trump’s 232.

As Election Day ended, nine states, including battleground states, were yet to be called, with Biden having a temporary lead in the Electoral College. With votes still being counted, both candidates addressed their supporters: Biden from Delaware did not declare victory, while Trump from the White House, did.

On Nov. 4, it was announced that Biden won Wisconsin and Michigan, reclaiming two crucial states for his victory that Hillary Clinton lost in 2016. The next day, the Trump campaign filed lawsuits in Pennsylvania, Michigan, and Georgia claiming voter fraud.

To this, Collin Murtagh ’22 said, “The last thing you want to see is either a Democratic or Republican candidate get robbed by alleged voter irregularities.”

That same evening, Biden once again addressed the country, along with Harris, and talked about COVID-19, the economy, and again didn’t declare victory. Trump also addressed the nation and stated that he was being cheated out of victory.

Early on Nov. 7, it was projected that Biden had won the presidency after winning Pennsylvania. He was later declared the winner in Nevada, Arizona, and Georgia, with Trump later winning Alaska and North Carolina. Biden flipped both Georgia and Arizona from red to blue for the first time since 1992 and 1996, respectively.

Although Biden won Georgia, he won by about 14,000 votes, being within the 0.5 percent margin required for a recount. Due to this, Georgia’s secretary of state Brad Raffensperger announced that per state law, there would be a hand recount of the nearly 5 million votes cast statewide, though officials didn’t expect the outcome to change.

On Nov. 20, Raffensperger certified Biden’s win in Georgia, with his original lead shrinking to about 12,300 votes due to four counties discovering more than 5,000 votes that initially went unreported due to human error.

With Biden only leading by 0.26 percent, the Trump campaign requested another recount in Georgia on Nov. 21. This second recount would be by machine and would not address the president’s concerns about matching signatures with ballots for people who voted by mail. In addition to Georgia, Wisconsin and Michigan both went to a recount, but the original outcome of a Biden win remained the same.

Hayden Peregrino ’21 said, “Biden winning was great and the beginning of the change for America from the terror of Trump.”

Exuberant people all across the country took to the streets to celebrate Biden’s win. He will become the first Catholic president since John F. Kennedy, the oldest president at the time of inauguration, as well as the first president from Delaware. He also broke records by receiving more than 80 million votes, the most received by any candidate in American history.

AP World History teacher Mike Kennedy stated, “[80] million is a lot of votes, and it appears that more and more people are engaged in the importance of voting; however, the relatively large voter turnout could also signify increased partisanship and polarization among American voters, which might not be a positive trend.”

As the Trump presidency ends, Murtagh summarized, “Trump did govern conservatively, but his kryptonite was his ego and rhetoric.”

Peregrino added, “Trump’s presidency was tough because he ruined us while supposedly making us ‘great’.”

Joe Biden and Kamala Harris were inaugurated as the new president and vice-president on Jan. 20, 2021.