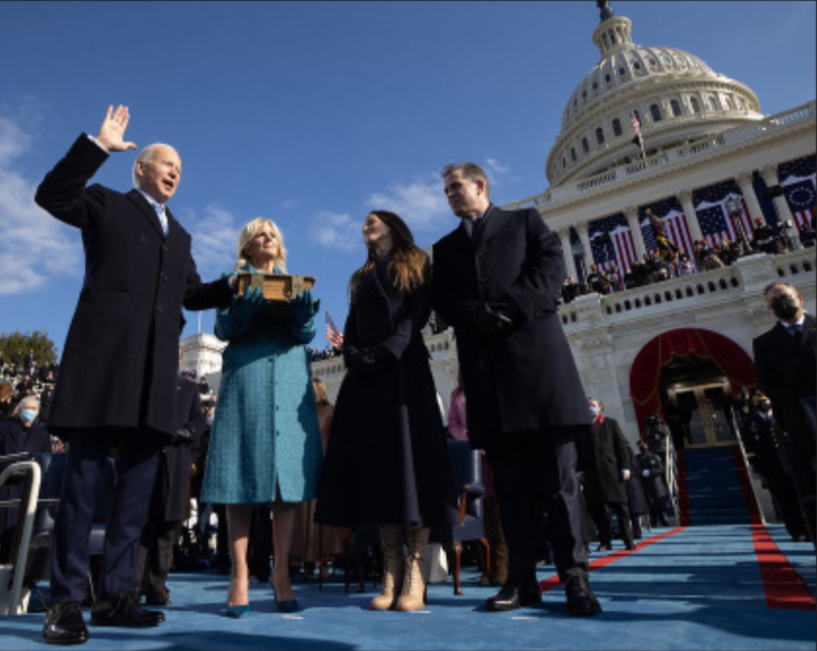 Joe Biden takes the oath of office to become the 46th President of the United States of America.

Joseph R. Biden Jr. and Kamala D. Harris were inaugurated as the 46th President and the 49th Vice President, respectively, on Jan. 20.

The inauguration, massively scaled back due to COVID-19, featured headline performances from Lady Gaga, Jennifer Lopez, and Garth Brooks, as well as young poet Amanda Gorman.

English Department Chair Mary Dalton shared her thoughts on Amanda Gorman’s poem, saying, “Amanda Gorman is such a natural speaker. I always like it when poets get a large public venue in order to share their thoughts. They offer a deeper level of insight into experiences that are shared by many.”

Dalton, who also moderates the literary magazine, The Grail, added, “It sounds contradictory, but she addresses that we are a country that is simultaneously torn apart by a crisis, but also forced to be brought together by it. Gorman’s poem was inspirational and hopeful, which is what the country needs right now.”

The Jan. 6 insurrection led to a larger security perimeter around the National Mall guarded by approximately 20,000 National Guard troops.

Social Science teacher Cory Nelson stated, “This inauguration was much different than the ones I have seen in the past. We have had a lot of political and social strife the past few years, and it was really great to see so much diversity on the stage. I see that as progress for years to come, but we aren’t in any way close to the equality and equity we need in America.”

Early on Inauguration Day, outgoing President Trump left the White House for his Florida estate, Mar-A-Lago, and became the first outgoing president to not attend his successor’s inauguration in 152 years.

Soon after Trump departed, Joe Biden and his wife, Dr. Jill Biden, headed for the Cathedral of St. Matthew the Apostle to attend Mass with congressional leaders and Kamala Harris and her husband. When Mass ended, Biden and Harris headed to the Capitol as guests were arriving, including outgoing Vice-President Mike Pence and his wife.

At 11:40 a.m. EST, Harris was sworn in and made history by becoming the first female, the first African American, and the first Asian American vice president. Biden was sworn as president at 11:47 a.m. EST.

In his address, he called for unity and healing and the end to the “uncivil war” of political ideologies.

Collin Murtagh ’22 said, “One thing I hope to see that he said was to build unity. It’s pretty obvious we are a divided nation politically, and there should be no one firing someone from their job or shouting down someone because of his or her political views, and no political violence.”

When President Biden arrived at the White House, he immediately went to work and signed various executive orders, most of them reversing Trump- era policies. The executive orders were tailored to address four crises: COVID-19, the economy, the climate crisis, and racial inequality.

Nelson is looking forward to the Biden administration’s work on “disenfranchised groups of people.” He said, “I want them to focus on immigration and pathways to citizenship, social justice, racism, and reform. But it’s not just on them, our nation’s youth need to vote, get involved, and make a change. Change starts from the bottom to the top.”