Bolts brings the thunder: Back to back champions 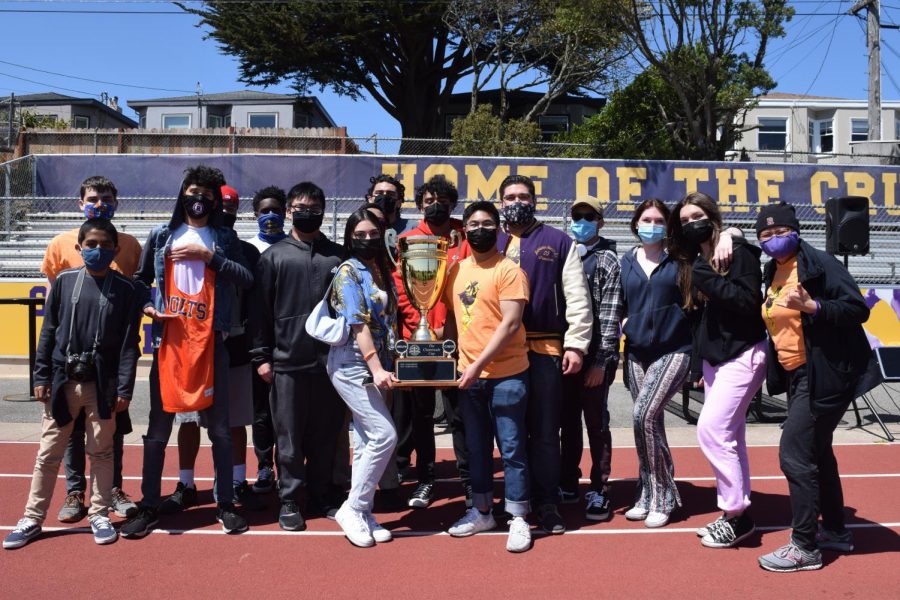 Members of the House of Bolts celebrate their repeat win of the Chaminade Cup at the Crusader Games BBQ.

Four Houses under one roof fight for the Chaminade Cup every year. The Riordan Crusaders wrapped up the 2021 Crusader Games that occurred online and in person. The games spanned two weeks with some cool Spirit Week ideas built in.

Last year, because of the pandemic, the games were held online. This year, however, students were able to go back to some normality by having games during lunch and a point rush day. For those who couldn’t do it in person, there were many fun online games.

Coral Shafer ’21, who participated on point rush day, said, “It was fun to play in person, even though it was cold. There was a good variety of games and the staff were encouraging.”

Colin Murtugh ’22 said, “I am really happy I chose Crusader Feud because I am a very competitive person and I like trivia. The questions felt really easy to me, so thank you to whoever made the questions.”

Pilar Provincial Melissa Nagar, said, “I would have to say my favorite spirit day was Decades Day because students got to choose a decade and were very creative in their costumes.”

Seniors were able to participate in the Senior Gauntlet. According to Jordan Noeuku ’21 “As for the gauntlet, it was a very exciting moment for me. I was honored to represent the House of Pilar.”

Here are the results of all the activities:  Bolts won the Chaminade Cup again, adding to their 2020 win. Russi won the Gauntlet with the help of Aislinn Cruz ’21 and Renato Bezerra Filho ’21.  Russi also won the Crusader Games. Pilar won point rush day, and Cana won spirit dress week.

Bolts Provincial Leo Magnaye ’05 said,  “Every little bit counts, and as the House of Bolts has shown. The competition has pushed everyone to become better every year, and with a back-to-back win, we’re going for a three-peat!”