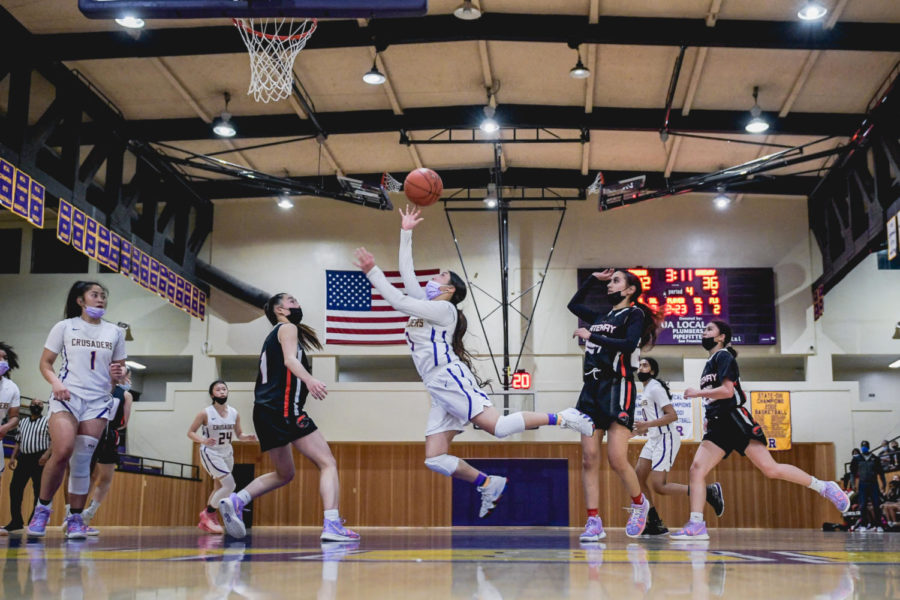 Juliette Restauro ’22 leaps into the air in a game against Gateway at the Crusader Forum.

With this year only being the second year of Archbishop Riordan transitioning to coed, there was very little change to the Girls Basketball program, as those starting five had another chance to prove themselves on the court this year.

This team of 14 fought through an independent schedule from November to February, finishing with a 12-8 record. Their highest scoring game was 56-18 against Balboa High School, and their toughest game was against Los Altos, going into overtime and ending in a loss.

Ronnique Louvier ’22 said, “We had good and bad games, which is normal. Honestly, I’m not satisfied with this year. We could’ve given more. Gave more in practice. Gave more in getting loose balls. Gave more in warm- ups. There was fire, but there wasn’t enough flames.”

While underclassmen out number the upperclassmen, Juliette Restauro ’22 and Louvier have set a foundation for the program and taken a leap of faith into the idea of setting the standard for womens’ basketball representation at Riordan.

This year, through lack of representation from the senior class, as only two students will leave the team after this year, the program moves forward with strong leadership in the dynamic duo of Aliyah Holmes and Aaliyah Dias.

Louvier said, “Overall though, we got some bucket getters on the team. We had some games we played tough, especially for our size. Within the next few years I know they’ll mature mentally, get better physically, and hopefully be consistent with giving good effort.”

In addition to great talent, this team had multiple coaching mentors to guide them along the way, including Coach Jené Morris, former WNBA player, who trained with the team throughout the season.