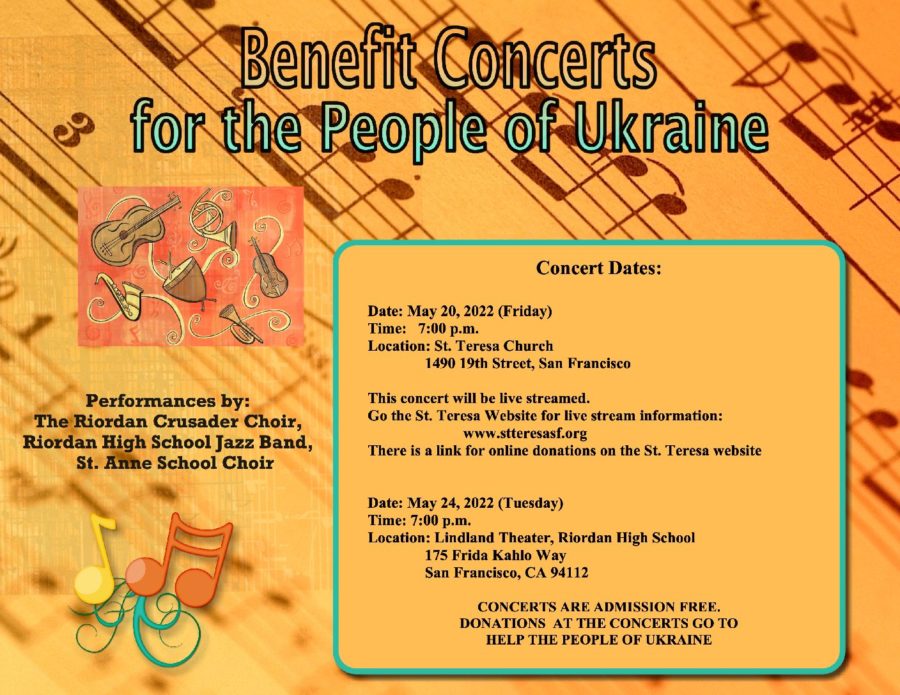 Archbishop Riordan High School’s Crusader Choir is currently putting the finishing touches on for two upcoming Concert performances to raise money for the refugees fleeing from Ukraine, and the scheduled dates for the concerts are May 20, at St. Teresa Church in San Francisco, and the second event is on May 24, at Riordan High School in the Lindland Theater. Both events start at 7 p.m. and will include additional performances from the Riordan Jazz Band and the St. Anne School Choir.

The concert on May 20 is free to the public and will be live-streamed worldwide. Donations from this concert will benefit the Jesuit Refugee Service’s work in assisting the people of Ukraine.

The concert on May 24 is free to the public. Donations from this concert will benefit the Dominican Brothers who are assisting the Ukrainian people, specifically the Ukrainian refugees fleeing to Poland. Donations for both concerts may be made on-line or by cash/checks at the concert.

Fiona ‘25, student part of Crusader choir, shared “For the concept we are planning on showcasing all of the prior songs that we were working on since the beginning of the second semester and we are also showcasing all of our solos and duets and everything that we worked on throughout the year and we’re doing that in the hopes that people who are able to donate will so that we can help others in need at Ukraine and there people’s situations right now so we want to do whatever we can to be able to help them.”

Ukraine’s Government has been evacuating civilians from war torn areas of a Russian Invasion. During the past few months, since the beginning of Russia’s attack, dozens of Ukraine citizens were evacuated from various cities and towns  and handed over to United Nations and International Committee of the Red Cross personnel for further assistance.

Ukraine’s President Volodymyr Zelenskyy, has been meeting with the U.S. and other world group leaders in discussing plans for how to counteract Russia’s ongoing attempts of control in Ukraine and its neighboring countries.

“In watching the news on television, we met and put our ideas together and discussed what we can do for the people of Ukraine,” 100 percent of the proceeds will go to help these people.”

The Crusader Choir has been part of Archbishop Riordan High School’s history since 1949, when the school opened its doors.

Laura Flaviani, the Director of Archbishop Riordan’s Marianist/Crusader Choir, shared,  “The Crusader Choir is a vital part of Archbishop Riordan High School because their goal is to foster and perpetuate music as an art form and an essential component of the secondary school curriculum and to encourage students to be able to share their greatest possible potential and to share their love of music with communities outside of the Riordan School community.”

She added, “It is an establishment of criteria and standards for musical performances that ensures the musical and educational integrity of Riordan High School, and to provide musical opportunities that will enrich the lives of Riordan High School students and aid in the development of a life-long appreciation of music.”

Flaviani shared, “I feel that the Crusader/Marianist Choir is a vital part of our liturgies. The mission of the Choir is to enrich, inspire, motivate, and engage the Riordan School community in hymns and sacred songs in the celebration of the Holy Eucharist and other liturgical celebrations.”

Additionally, “Ministry in music is not only very rewarding in one’s own personal life, but it also helps one discover a new appreciation for the value of working in unison with others focusing on glorifying God with ‘one voice’.”

Abby Donovan ‘22, student part of Crusader choir, shared, “Something that I enjoy a lot more than I thought I would, is singing at the masses. It might not seem like that big of a deal, but I’ve gone to public school for my whole life, and we never really used to talk about religion, so it’s really nice to get to be with people my age and sing about Christ, something that’s not typical of me. It’s inspiring to me and it enriches me”

Even though the Covid-19 Virus put some strong restrictions during challenging times, the Crusader/Marianist Choir, with its personnel in the musical education field and professional music field, worked together to keep music and the other arts strong in Archbishop Riordan.

The choir has continued to keep up with guidelines and news regarding research and studies on the effects of Covid-19 and how to create tools and methods that can be used to continue the choir’s musical education in rehearsal halls and performance venues.

Maya Torres ’22 said, “I think that they provide a liveliness to the school, and to the community of students, teachers, faculty and staff. I think that they do a lot for school events such as festivals and masses, etc. They bring everyone together and we can sing songs led by the choir led by the school, and it brings a sense of family and bonding.”

Flaviani shared, “When I speak with a student that is interested in being in the Choir I encourage them by telling them some of the following: Come and share your gift of music and song with others, because your talent will bring happiness to others. You are working with others that share your same compassion for singing.

She also shares this quote by author Sarah Dessen with students: “Music is the great uniter. An incredible force. Something that people who differ on everything and anything else can have in common.”