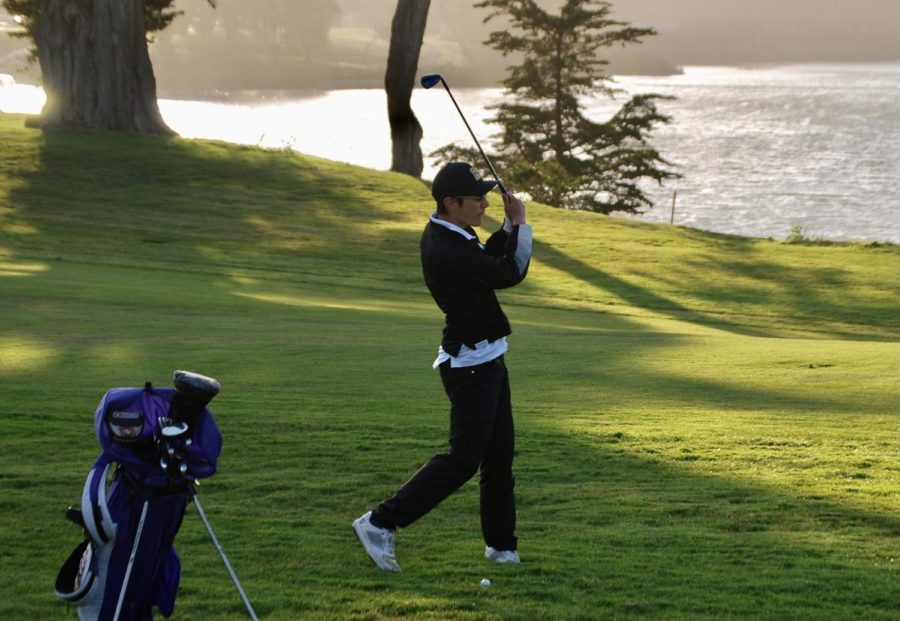 Matthew Manzi ’22 tees off during the final match at Harding Park.

As the sun began to set on Harding Park, it reflected magnificent lukewarm colors on the Riordan golfers, and the sky was painted with the colors of the Golden Gate Bridge. Even though the scenery was magnificent, thewind was not.

The Riordan golfers experienced wind that flurried ever so strongly to redirect golf balls hard left or right depending on what hole they were on.

However, this had little effect on the Crusaders as they played flawless throughout the day, bringing home a Crusader victory with a score of 212-219 against the Lowell Cardinals with Rey Ponce ’22 as the medalist,finishing with a 36 (even par) in the 9 hole game.

Celebrating their win and the end to their regular season, the golf team coach, Jeff Isola ’98, surprised the senior golf team members with a ceremony thanking them for their leadership and commitment during the golf season.

Isola also gifted the seniors with a bouquet of purple and gold flowers honoring them for their dedication to the team. Afterward, the golf team’s parents honored each senior player and their contributions to the team.

“Golf was the first sport back on campus, and thanks to senior leadership we persevered,” Isola stated. “These guys, they mean a lot to me.”

Being a young team this year consisting mostly of underclassmen, the seniors helped guide their underclassmen and prepared them during the golf seasons at Riordan. While of course, leaving great memories behind.

Leading by example, the seniors made an impact on their game, which was shown during the ceremony where underclassmen congratulated their senior peers on a great regular season and look forward to the future of the Riordan golf team.

“Going to miss these guys,” William Wolcott ’23 said at the end ceremony. “I had a lot of great memories with them.”