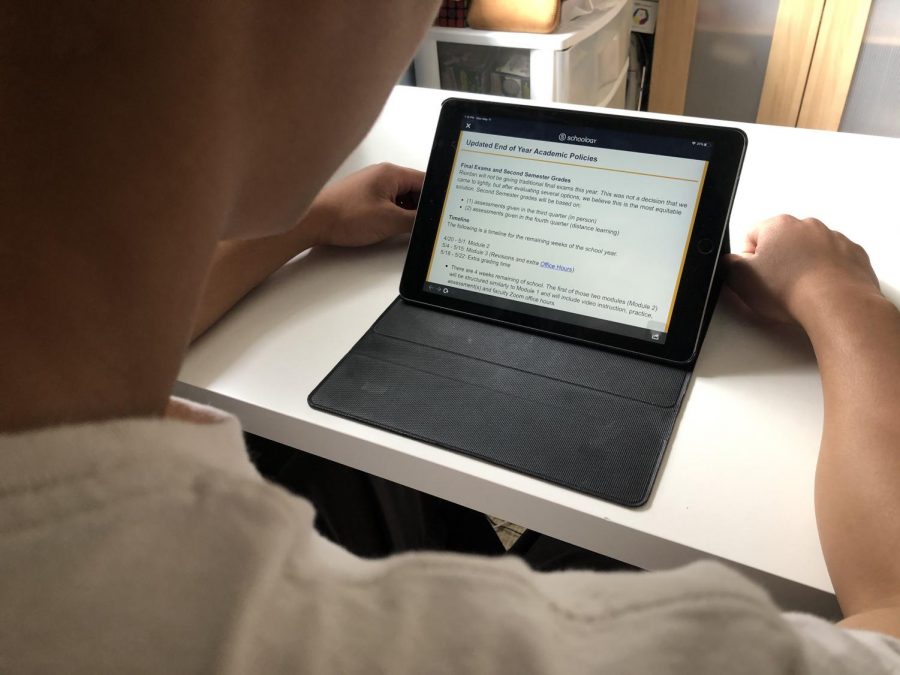 Final exams have been a staple in high school: the ultimate testament before the highly anticipated winter and summer vacation. Originally scheduled for May 18 to 22, the last week of school, the fate of the gauntlet known as final exams was up in the air with the onset of distance education and the potent possibility of never returning to school.

On April 20, Archbishop Riordan Community was notified that the ordinary schedule for final exams were essentially cancelled in favor of the module system. Grading for the second semester will now depend solely on assessments from the third and fourth quarter. The last module of the school year, May 4 to 15, is a revision period for students to make up any assessments that they missed during distance learning.

In effect, the extensive cumulative exams frequently seen during finals week are being replaced with assessments done during the module.

The reasoning behind this decision is the same reasoning that goes into the module system concept as a whole.

Many in the Riordan community may not have the proper necessities such as wifi capabilities to make it to mandatory class meetings, let alone to scheduled finals. The Riordan administration felt that this model of learning, called synchronous learning, is not the best for the student body under shelter in place.

“It’s really hard to sustain a regular schedule on a daily basis,” said O’Brien. “If you don’t do synchronous learning, it’s very very hard to hold a regular final exam on the final exam schedule.”

Furthermore, according to O’Brien, the lack of face time and instruction from teachers because of the module system has the potential to make students unclear about the content present on a weighted final exam.

“We didn’t feel that it was equitable or fair to base a student’s grade from 15 to 25 percent on a cumulative final exam without a student having regular face time with teachers.”

There were concerns when considering this option. Some of the content covered throughout the semester and the measure of general knowledge could not be fully assessed. There is also the possibility of students relying on a weighted final to bolster their grade.

However, O’Brien believes that this move was in the best interest for the Riordan community

“Those concerns were much outweighed by the positives in going with this modular paradigm. Now we’re giving students every chance of success for showing an honest effort,” he said.

With these reforms, potentially struggling students are given a chance to repair grades if they fell throughout quarantine with the Revision Module, and do not have to worry about an opaque final exam.

The effect of this is an early end to school, with no new work as of this past Monday and no more submissions being accepted after May 15, right before the week of traditional final exams. Just as students need the time given in the revision module, teachers need the same. Finals week is now designated for teachers to grade the new and revised work.

“In order to be fair with teachers, we need to give them time to  get all of those grades taken care of,” O’Brien said.

At the end of the year, Riordan’s primary goal is to give students and teachers the opportunity to get the letter grade that most accurately reflects one’s mastery.

“Your teachers are going to do everything they can to make sure that you have a good, representative, fair grade for the class,” O’Brien said.

Many students expressed their gratitude for the decision. John Gill ’20 stated that he is happy, “Happy that I don’t have to study or take another test after the AP exams.” He continued, saying, “Senioritis really hit me hard as soon as we went to online schooling.”

The Crusader • Copyright 2021 • FLEX WordPress Theme by SNO • Log in